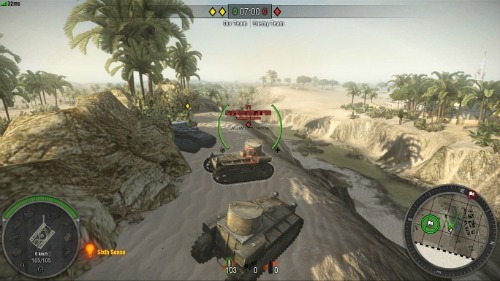 On February 12, 2014 Wargaming launched World of Tanks: Xbox 360 Edition bringing the free to play franchise onto the Xbox 360. The game features 15 versus 15 team based multiplayer battles and is a free download with microtransactions for faster unlocks and upgrades.

World of Tanks: Xbox 360 Edition is free to play but does require an Xbox Live Gold account for access but for other Xbox Live Accounts the game includes a seven day timed trial. Additionally, note that from Friday, February 14, 2014 to Sunday, February 16, 2014 Xbox Live Gold is available for free to Xbox 360 users.

Word of Tanks originally launched on PC. The Xbox 360 edition integrates Xbox Live features into the game such as Friends, Parties, Achievements and a redesigned user interface to maximize the larger screen.

World of Tanks: Xbox 360 Edition brings to the console a free to play experience which allows disabled gamers the opportunity to download and play the game without a financial commitment. Money can be spent after disabled gamers determine that the game meets their disability related needs rather than beforehand.

Microtransactions provides faster upgrading in a variety of ways from a timed premium account that provides 50% more silver and XP per battle to gold packs for purchasing in-game items. Battles end with a display of both the premium and non-premium amounts of silver and XP earned for gamers to understand the advantage provided by premium accounts.

The gameplay is straightforward, gamers control a tank and work within a team against another team to accomplish an objective such as taking the enemy camp. Gameplay is relatively slow for multiplayer matches with a focus on strategically lining up a shot which gives all disabled gamers the needed time to successfully play rather than relying on twitch reflexes.

For deaf and hard of hearing gamers, the multiplayer experience does not require verbal communication. Tanks move slowly, staying within a team and understanding the nonverbal communication of the team’s strategy is surprisingly effective. Additionally, a radial wheel of preset text communications is provided to both respond to teammates’ requests and to issue requests. The game does not provide subtitles which are namely needed for the tutorial but the instructions are provided in text on the screen.

For fine motor disabilities, the control options include inverting the Y axis, toggle zoom, as well as adjusting the sensitivity for heading (left to right) and pitch (up and down). Four preset controller layouts are available – A, B, C, and Southpaw. A, B, and C mostly moves actions amongst the D-pad and face buttons. Southpaw allows for moving forward and back via the triggers while using the right analog stick to steer. In all configurations nearly the entire input in the controller is assigned an action including pressing down on the analog sticks. However, in-game features allow for a multiple strategies such as the cruise control ability makes the player a moving target that is harder to hit and allows for one handed control of the tank.

For visual disabilities, overall, the game uses onscreen text and icons more than verbal communication. The text and icons can be small and difficult to identify. Aiming requires waiting for the reticle to shrink and identifying that it changed color in order for the shot to hit. There is a colorblind mode that adjusts the reticle’s color but as a symbol the reticle can be difficult to identify against the environments.