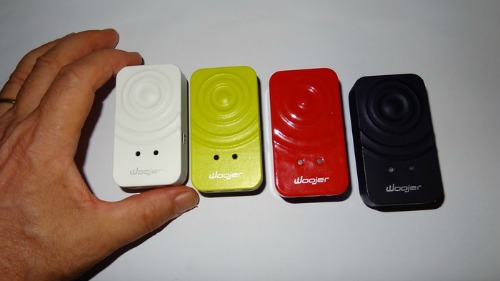 Woojer, a wearable haptic feedback device for multimedia experiences (a device that vibrates against the body in conjunction with sound) officially launched its Kickstarter campaign for $100,000.

As of the time of this writing, its campaign reached $20, 682 with 29 days of fundraising days remaining. Woojer is designed to bring the sense of touch to auditory experiences ranging from video games to music.

The “Feel the Sound” tagline is the inspiration behind Woojer. Its inventor, Mor, a rock concert audio engineer, searched for a way to bring the live concert experience home. Woojer is a wearable gadget, roughly the size of a matchbook that affixes to clothing and emits silent vibrations along with sound. Woojer is an extension of multimedia devices that play sound such as a smartphones or video game consoles and has a wired connection via a standard 3.5 mm audio jack.

The technology behind Woojer is based on the premise of the device acting as a wearable subwoofer which emits noticeable, tactile vibrations at live music events. Woojer amplifies frequencies below 500 hertz and interprets the sound into multi-tone vibrations. While the multi-tone function allows for a range of vibrations to reflect an array of sound, the overall vibration intensity has thee levels of adjustability. Woojer is available in three colors: red, black, and white.

The Kickstarter rewards are essentially the Woojer kit at a discount (from the estimated $99 retail cost) when it hits the market. There are limited availabilities of the discounted Woojer kit and the $49 price point is already sold out. The limited $59 price point remains. The suggested optimum experience is two Woojers, one clipped at the belt level and another affixed via a magnet on the chest. The extreme Woojer kit includes two Woojers. For this package, the $99 donation level is sold out, but the limited $119 price point remains.

As a deaf gamer I feel comfortable stating that the deaf and hard of hearing are experts in wearable technology. From hearing aids to cochlear implants and FM systems to Bluetooth devices we have affixed, clipped, and magnetized objects to our bodies.

Wearable technology for more than short periods is tricky. Clips fail, neck loops swing in our way, and magnets jump onto other magnet friendly surfaces. Given Woojer’s wired connection with an audio cable to sound emitting gadgets such as a smartphones or tablets, such configurations are traditionally best suited for sedentary use rather on-the-go experiences.

Woojer is marketing itself specifically to the hearing impaired, even including American Sign Language interpretation in its promotional video that you can view here. Certainly, disability is complicated, and not all deaf and hard of hearing know ASL. However the inclusion of an accessible format for an internet video at a time when most internet videos are inaccessible to the deaf is a rare treat and an appreciated outreach.

Admittedly, I am skeptical of wearable technology after 20 years of various device configurations in my day-to-day life. At $99, Woojer is cheaper than most wearable technology, in part due to the fact that it is not acting as a replacement device to feel sound instead of hearing sound but as an accompaniment to the audio. Still, Woojer provides the tactile sound experience without requiring deaf listeners to crank up the volume to painful levels for their hearing counterparts.

As a gamer the possibility of technology that can translate in-game audio cues to a tactile alert is a device I would invest in. After all, I already have a three foot audio cord sitting by my television for my video game playing now.