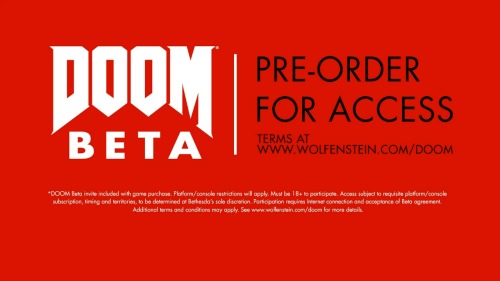 The in-development Doom game remains shrouded in mystery with no official announcements divulging its release date, what systems the game will release on or even declaring its final title (the previous Doom 4 moniker has been shelved for Doom). Both Wolfenstein: The New Order and the new Doomwill be published by Bethesda Softworks.

While not an official announcement, the lack of Playstation 3 and Xbox 360 betas points towards the new Doom releasing on next generation consoles only. Wolfenstein: The New Order will be available on Playstation 4, Xbox One, Playstation 3, Xbox 360, and PC.

As of now, beta keys are only officially announced for boxed copies of Wolfenstein: The New Order. Behind the scenes negotiations continue to provide beta access across as many digital platforms as possible including Steam, Microsoft, and Sony.

While Wolfenstein: The New Order releases on May 20, 2014 the Doom beta will not be immediately available. Players who register a Doom beta key are advised to “Please ensure you use a valid email address that you will continue to use in the future; you will not be able to change the email address associated with your keycode.” This hints at a release date substantially in the future. Updates and further announcements will be provided via e-mail.

The entire FAQ is available here.

The divergent stances on whether the Doom beta is in front of or behind a paywall by the next generation consoles continues an ongoing difference between the platforms. Microsoft is infamously not allowing use of services without Xbox Live Gold whereas Sony is continuing to provide access to betas and free to play games without Playstation Plus.

For disabled gamers, the paid or free access to the Doom beta and other console features goes towards the ultimate cost of owning a next generation console on a budget that often must factor in out of pocket disability related costs. For disabled gamers who are interested in both Wolfenstein: The New Order and the new Doom but who remain on the previous console generation, the beta’s lack of a release date provides a time gap that allows disabled players to upgrade consoles by the time that the beta launches.