Why Used Games are More Accessible 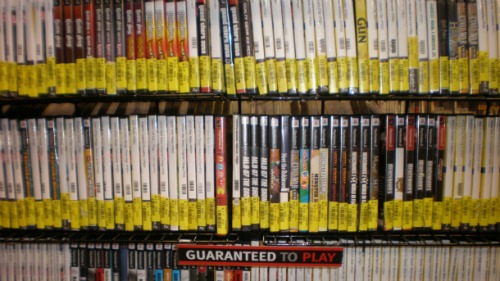 One of the darker rumors surrounding Microsoft’s new hardware is that it won’t allow players to buy games used. While this is probably nothing more than speculation, it would be unfortunate to see Microsoft make this decision, because it would irrevocably damage the system’s accessibility.

First, used games are cheaper. For a lot of disabled gamers who are on limited incomes, the only way they can enjoy hot game titles is if they pick them up used. Also, the longer someone waits, the more likely they are to hear that a game is inaccessible. Therefore, it is not only cost effective, but also incredibly useful for determining a game’s accessibility if a player waits and decides to buy it used. For example, in my own gaming career, I was incredibly surprised when I heard how forgiving Metal Gear Rising: Revengeance was. I had not originally planned on playing it because from all the footage shown at E3 and other conferences the game looked to require too many rapid button presses. However, as I shopped in GameStop for something to rate for DAGERS, the clerk told me how easy he thought the controls would be for my disability and sold me a used copy. So not only was I able to get the game at a lower price, because I waited to get a used copy, it came with a recommendation from a sales clerk who knew both the game and my physical ability. So there was much less of a risk when I purchased the game.

But the bigger issue is that used games typically have return policies that are much more lax than new games. A non-accessibility illustration of this was Star Wars: Knights of the Old Republic 2. I had eagerly purchased it only to find out that it was not playable on my system. The bad news was, I was out sixty bucks because my hardware failed. When speaking in terms of accessibility, instances like this happen much more often. For example, Medal of Honor: Warfighter had so many barriers in it that I couldn’t progress past the fourth stage, no matter how hard I tried and even with the help of a friend. But because I bought the game new, there was nothing the sales clerk could do except apologize. By contrast, if I or players like me are able to buy games used (at GameStop, for example), there is usually an extended period of time in which the game can be played and returned without losing any money. As a result, players have the option to try games, and if a title proves to be inaccessible, they can simply return it for a full refund.

The bottom line is this: Buying a game when you have a disability is always a risk—one that many disabled people can’t afford to take very often. So when they do, they really need to have the option of buying used games so that the risk of buying a game that they physically can’t handle is greatly lessened.