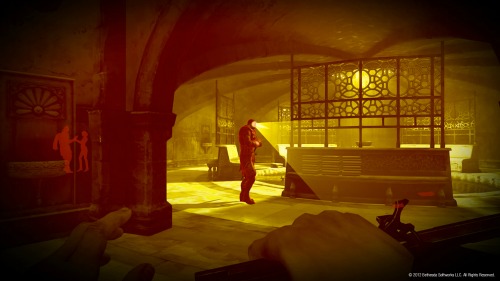 It is nice to know that after a week of hectic website designing (my legit job) I could sit down and enjoy a romp in Arcane Studios’ latest game, Dishonored. In case it wasn’t clear, I REALLY DIG THAT GAME—probably because it offers players the opportunity to choose between different play styles, all of which complement different players’ abilities. I tend to gravitate towards stealth mechanics because, in my experience, being stealthy makes a game generally more accessible.

But why does the inclusion of a stealth mechanic aid the accessibility of a game? The answer to this question is found in the very definition of what it means for a game to include stealth. If a game includes stealth, the designers are necessarily admitting a couple of realities for that particular game. The first is that they expect players who are using the stealth mechanic to plan through their moves before they make them. This in turn removes a barrier that is found across all games, whether they be first person shooters or hack and slash RPGs: If a game uses stealth, developers must necessarily relax the time requirements to complete actions within the game. After all, you can’t focus on being quiet while you eliminate the guards on a busy Dunwall street if you are worried about a door closing at one end of the alley before you reach it. For these reasons it seems that when a game includes stealth mechanics, the game tends to naturally eliminate certain barriers and become more accessible.

However, there is one area in which games that include stealth actually create more barriers, if stealth is the only option. This is the area of hearing disabilities. When the original Assassin’s Creed came out, there was a lot of disappointment from the disabled gaming community because the game had no subtitles. As a result, not only was the main story line inaccessible for the hearing impaired, but also the entire rest of the game. All of the side quests and open world features were inaccessible because the stealth mechanic, like all other stealth mechanics, relied heavily on the ambient noises that surrounded the player. For instance, in the Thief games a player was more likely to be noticed if they were walking on a hard surface than if walking on a soft surface like a carpet. But if there is no way of sharing this information apart from the sound itself, these games are completely inaccessible to those with auditory disabilities.

As Dishonored has recently illustrated, this is not a pitfall of the concept of stealth games, rather it is a problem with the way stealth is implemented in most games. If more games had graphical representations for a guard’s awareness level, then sound would not be as integral to the stealth mechanic and games like these would become even more accessible than they already are. Nevertheless, stealth is already a great way of overcoming barriers for gamers with both fine-motor and sight disability, since it allows the player time to plan and limits the impact of slow gameplay.