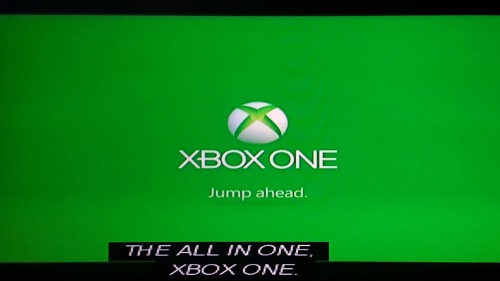 Gamers all know that last fall Sony and Microsoft launched next generation video game consoles Much has changed in the video game industry over the past few decades from technology to the integration of social media, but the television commercial remains a promotional mainstay. Sony, Microsoft, and Nintendo all aggressively broadcasted console television commercials touting their next generation features but only one company included closed captions, Microsoft with the Xbox One.

Closed captions in television commercials are not mandated by law in the United States, but the console war reminded me about the obstacles for participating in video game hype as a deaf gamer who requires closed captions or subtitles in video content.

Over the past two decades we have witnessed the evolution of closed captions as a separate box hooked into our television to a built in feature in all analog televisions to back outside of the television and into the cable box due to the transition from analog to digital broadcasts. Throughout all of the changes, television commercials remained exempt from mandated closed captions because the programming is less than five minutes in length. Instead, commercials are captioned at the discretion of the advertising company. Without closed captions I cannot typically follow along even if I am interested in the product. Commercials are no big loss, right?

I am willing and agreeable to patiently wait for the accessible features that allows me to enjoy other types of entertainment. Music requires that I play music via my hearing aid peripherals while following along to the lyrics. At the movie theater, sometimes the closed caption device is available for the film that I want to see and sometimes it even works but the previews are not captioned. When we all rushed to download the latest Netflix, Hulu Plus, and Amazon Video apps I waited years for the passing of The Twenty-First Century Communications and Video Accessibility Act of 2010 that requires closed captions in video content on the internet for programming that was also broadcast on television. I continued waiting for three years after the law’s enactment for its implementation.

But for gaming, I do not want to wait. I am a gamer. I want to be a part of the day one experience by laughing at the joke or marveling at the gameplay and know what is occurring onscreen without asking another to watch the video for me. For weeks, months, or even years leading up to new video games or new hardware we witness the hype play across all avenues of social media heralding the new game, hardware, or service. None of that content contains closed captioning from developer diaries to extended gameplay videos. Even gameplay videos with the subtitles enabled are highly rare. Notably, Techland has released two videos of gameplay footage for its upcoming game, Dying Light. The footage is a few minutes of gameplay and includes the subtitles turned on. Watching promotional footage for an unreleased game that includes subtitles is a sudden sense of inclusiveness to know exactly what I am watching. I want to participate in its prerelease hype now and Dying Light stands out amongst all upcoming games simply due to its subtitled gameplay videos.

Last fall I was caught up in the anticipation of the new consoles, I decided to try again and rewound to the Xbox One commercial and played it. To my utter surprise, the Xbox One commercial was closed captioned. Such a simple addition immediately stood out amongst the clutter of next gen advertisements on television and online due to the lack of captions for any video game commercials.

As disabled gamers we constantly ask for able bodied assistance with chronically inaccessible aspects of our lives. Removing a barrier, no matter how seemingly small, reverberates in our lives by being one less instance in which we are dependent on others. While the Xbox One commercial played I watched and enjoyed a commercial for a product that I was excited to follow. I felt a sudden sense of freedom without the need to ask a hearing person to relay the information to me. While I will still require assistance with a variety of missed verbal communication in my day to day life, including commercials without closed captions, I was able to participate in real-time with the Xbox One hype. During the commercial, I laughed at the interplay between ex-NFL players, Brian Urlacher and Ray Lewis, who voice chatted through the Xbox One while simultaneously playing Madden 25. Most importantly, I laughed in real time in the instant that the jokes were said while I watched the commercial.

Now I paid more attention to Microsoft’s television advertising. I noticed closed captions across the suite of Microsoft’s products including the Surface, Microsoft’s tablet commercials. In fact, in the state of lethargy that follows Thanksgiving feasting I absently watched hours of television during which I nearly memorized the commercial for Window’s Nokia Lumia 1020 smartphone.

Excited to participate in the competition between the consoles, my diligence kept me looking for the Xbox One’s opponents wanting to assess the battle for our living room. But both Sony’s and Nintendo’s commercials for the Playstation 4 and the Wii U were not closed captioned and remained inaccessible.

While I have seen the commercial multiple times as I watch The Ultimate Fighter Nations or Blacklist, I still stop as I watch the words play across the screen:

“Music symbols” “[Male Announcer] This is an invitation to what Fortune called ‘The Console of the Future’” “Xbox Answer” “Did you see that?” “[Male Announcer] To what Entertainment Weekly described as “One box to rule the living room.” “Go to Star Trek Into Darkness” “[Male Announcer] The New York Daily News hailed as “ The most ambitious gaming machine yet.” “Go to Titanfall” “But one fan said it best ‘The Xbox One is the greatest thing that’s ever happened to mankind.” “The all in one Xbox One” “[Music symbols] Everybody come on.”

Years ago, as a child I sat through an uncaptioned viewing of the movie, Mr. Holland’s Opus in a sixth grade music class without understanding the film other than the sections with American Sign Language. The film is the tale of a music teacher’s struggle to connect with his deaf son. After school, I turned on my Sega Genesis and popped in the RPG Landstalker, and for hours I understood every word of what was occurring. Before voiced dialogue and complex animations, sound provided background effects but all meaningful interactions, both verbal and nonverbal, were shown in text. Video games provided a safe haven from a world where I struggled with communicating with those around me.

New technology often provides more and less accessibility simultaneously by giving us new accessible options but forgetting to bring along the previously established accessibility. The Xbox One commercial may only be a commercial but it is a moment that is less than a minute long that reminds me of how I began gaming in the first place.