What Is a Forgiving Game? 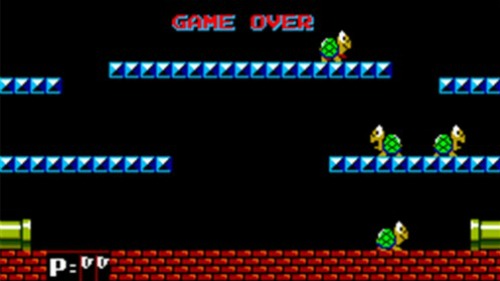 Simply put, a forgiving game is a game that allows the player to make mistakes without undue negative consequences. The further back in game history one looks, the less and less forgiving games are. For instance, in the original Super Mario Land, if a player died at the very end of a stage, they would have to go back and replay the entire stage. And if they burned through their entire allotment of lives, they would be confronted by those two evil words, “Game Over,” which would force the player to go back to the beginning of the world, if not the beginning of the entire game. This is a classic example of an unforgiving game—a game in which the slightest error in timing could send Mario plummeting to his death.

However, in modern games, there has been much effort to take this hard edge off of game play. A game can be forgiving in lots of different ways. Here are ten of the most common.

1. The ability to change difficulty whenever necessary
This is the most basic element a developer can include to make a game forgiving. In effect, if a player is having trouble with a particular sequence, they can determine whether changing the difficulty makes it possible to complete that part. This could take a form similar to that in the Soul Calibur series, which allows players the option to retry the level on a lower difficulty after they are defeated on a stage. Or it could be a distinct option which the player can access at any time within the game’s menus.

3. One single mistake doesn’t kill the player
Perhaps the single most important element that makes a game forgiving is that single mistakes don’t ruin a player’s chances of beating a level. To illustrate this, compare the Prince of Persia series to Darksiders II. Both of these games include free-running elements and puzzles that require quick reflexes as the character jumps from wall to wall and executes other acrobatic maneuvers. The main difference is that in Prince of Persia one missed step or mistimed jump could kill you, since falling from above a certain height is always fatal. By contrast, in Darksiders II, when the player fails a free-running puzzle or falls from a great height, Death’s reaper form takes over and flies the player back up to safety with a minor penalty to their health. This means that the player is free to attempt the puzzle again without having to start over from the last save point. If they continue to fail, they will eventually die. But they don’t die simply as the result of one failed run or one mistimed jump.

4. Lots of save points, or the ability to save on the fly
This next point is one of the most crucial aspects in determining whether a game is forgiving. If there are only a few preset points at which a player can save, then they will be forced to retread the same ground over and over again every time they die, in much the same way that the original Mario games made the player redo the entire stage, even if they died when trying to grab hold of the flagpole at the very end of a stage. Games can do one of two things, or both. They can either include lots of preset save points, or they can allow the player to save at their discretion. Either of these will ensure that no matter where a player is, if they are continually failing and having to reload a game, they will not spend a lot of time retreading the same ground before they can retry the point at which they failed.

5. The ability to respec a character’s skills and abilities
This element usually only affects games in the RPG genre, where the player can take multiple paths and develop skills in the order that best fits their play style. What developers have to be careful to avoid is a player getting locked into a particular skill set, and that skill set not being able to flex to a player’s needs at a particular point. If a game allows the player to reassign skill points, even at a cost, it means that the player always has the option to explore different mechanics to overcome various situations.

6. The ability to regain health or lives by various means
The line of Mario games on Nintendo 3DS perfectly illustrates this point. Not only are the classic green mushrooms present, which immediately grant the player an extra life, but Mario gains an extra life for every 100 coins he collects. This means that if a player is burning through a lot of lives in New Super Mario Bros. 2, they have multiple ways of refilling their supply, thus making it harder to actually run out of lives and get the dreaded “Game Over.” Another way in which a game can be forgiving in the area of health and lives is if it includes an automatic health regain feature, as is common in many first person shooters. All of these methods of restoring a player’s life mean that even if they take repeated damage, there are limited chances of dying or of getting a “Game Over” and having to restart large portions of the game.

7. The ability to refill supplies at any point in the game
Many games include a loot or item system that provides the player with things such as special weapons or potions that they can use whenever needed. If the player has the option to refill these supplies at any almost point in a game, it means that no matter what situation they go in to, they can always go into it prepared. A perfect example of this is Blizzard’s Diablo series, in which any time a player is not embroiled in combat, they have the option to return to town via the town portal and sell loot they’ve picked up and buy new supplies. This in turn means that the player will always have a potion or two for when things get dicey and can always make sure to go into battle with the best gear and weapons.

8. Multiple means of accomplishing objectives
More and more games are including sandbox elements. This means that a game may have several different paths one can follow to complete objectives. An upcoming example of this will be the game Dishonored, in which the player is a supernatural assassin. The game’s developers have said that the method of play will be almost completely up to the player. They can either take the aggressive route, going in guns blazing and killing everybody, or they can take the strategic route and accomplish their objective without anybody knowing they were there and without shedding a drop of blood. What’s even more important is that these paths are not mutually exclusive. Rather, the player can at any point choose to alter their play style to fit the situation. As a result, games that include this kind of variation are usually more forgiving than games that do not.

9. Large target areas
On the mechanical side of things, if a game includes large target areas for specific objectives, it is harder for a player to overcompensate in trying to hit the target. Most first person shooters would be a good example of this. Although not highly realistic, in most shooters you can kill an enemy by shooting any part of his body, even if it takes multiple shots. This means that the player doesn’t have to take the time to line up a perfect headshot to get the job done. This principle can also apply to platforming games that have large landing places for jumps and large areas to maneuver in.

10. Time windows that allow for mistakes
Finally, if a game employs time based puzzles, it is important for a forgiving game to have such puzzles allow for player error. Returning to the Prince of Persia example, many of the puzzles involve running from one end of a room to the other over a series of jumps before a door closes, requiring near perfect execution in order to make it in time. As a result, a player has to be extremely proficient at this type of maneuver before they attempt such a puzzle. These kinds of situations can make games very unforgiving, especially when one misstep can doom the entire effort to failure. Sufficient time windows are extremely helpful in making a game forgiving.

By now it has been illustrated that a forgiving game can still be challenging. Such a game is not necessarily easy to beat, but simply gives the player ample opportunity and resources to overcome challenges without forcing them to retread ground they have already completed.