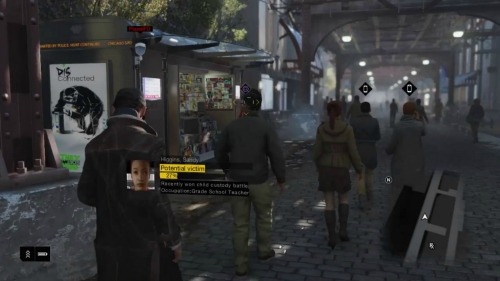 Watch Dogs will release on May 27, 2014 for the Playstation 4, Xbox One, Playstation 3, Xbox 360, and PC. At an indeterminate time after the initial launch, the Wii U edition will made available.

Watch Dogs is the story of hacker Aiden Pearce and a newly released story trailer highlights his tale.  He is an elite hacker who stumbled onto a secret that cost his niece her life. Looking for revenge he hits the streets of Chicago armed with a smart phone and a gun. The story trailer is available here.

In fall 2013, Watch Dogs was one of the most anticipated launch day games alongside the Playstation 4 and Xbox One. However, a month before release Ubisoft Montreal delayed Watch Dogs into spring 2014. Ubisoft posted a blog interview with Senior Producer Dominic Guay discussing the game’s delay.

Mr. Guay unequivocally stated that the original fall 2013 release date was not an arbitrary date decided by Ubisoft. The Watch Dogs development team chose the initial launch day and in fall 2013 the game itself was a complete and playable experience. However, as a new franchise the game’s polishing required more time than expected. Without a previous iteration for comparison or previous experience with the franchise, more design and development were required for establishing the new video game world. For example, Aiden can hack into NPCs’ communication devices in order to prevent a call for reinforcements. The Watch Dogs team used the additional time to add a feature for use in combat where the player can hack NPCs’ headsets to emit a high-pitch, high-volume sound. Other changes included clarifying the User Interface (UI) to more clearly show players pertinent information such as multiplayer skill trees.

The entire blog is available here.

Ubisoft brought the Assassin’s Creed franchise into the previous console generation. With Watch Dogs, Ubisoft is poised to reinvigorate the action, adventure gameplay within an open world for a new console generation. Additional time to polish a new IP only benefits disabled gamers in the hope that the extra time allows for video game accessibility features that are traditionally forgotten in new franchises.