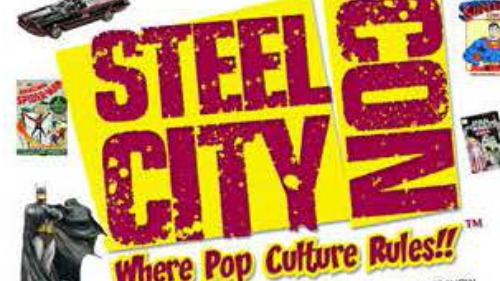 I reside in Pittsburgh, PA and from December 6-8, 2013 Pittsburgh hosted its Steel City Comic Con.

Pittsburgh is a relatively small city, and the Steel City Comic Con is not a media outlet of video game announcements but a smorgasbord of comics, toys, and celebrities. Amongst the booths are video game related collectibles, and while perusing the Monroeville Convention Center I snapped photos of video game related items. The majority of such items are action figures, but other items popped up as well.

My Steel City Comic Con adventures fittingly began at McDonalds which is running the Xbox One giveaway, One Hot Holiday, until December 23, 2013. While not an Xbox One, I won a downloadable game, Ms. Splosion Man, for the Xbox 360.

Easily the most represented games were the franchises Halo, the Legend of Zelda, and Gears of War, with a good smattering of Minecraft items. Immediately, I spied the Halo Covenant Energy Sword for sale, and directly across from the weaponry were a used Nintendo and Playstation. Remember when those dusty consoles were the height of gaming technology?

Video game action figures were everywhere. Gamers wanting to spend money to display their favorite gaming characters had their choice of figurines. Pictured here are Elizabeth from BioShock Infinite, Simon from the Castlevania franchise, and Chell from Portal 2.

Nintendo was represented by these plush backpacks of Mario and Yoshi, but Mario was feeling shy. Link’s shield from the Legend of Zelda franchise kept Nintendo’s presence strong elsewhere in the convention.

Used consoles and their games were on sale everywhere throughout the convention, even including a brand new Day One edition of the Xbox One. Nearly hidden was an original cartridge for not only Super Mario Bros. 2 but also a golden The Legend of Zelda.

Miscellaneous items unexpectedly popped up in booths, including this Borderlands psycho bandit mask and a Q*bert lunchbox.

A wall of patches included a range of video game themed references, but the Resident Evil Umbrella Corporation and the Mass Effect N7 as well as the paragon and renegade patches stood out.

Just when the video game themed swag seemed over, the end of a booth included a variety of keychains and necklaces including these with Kingdom Hearts’ icons and keyblades.

From the disability perspective, the convention includes wheelchair accessible thoroughfares with ample room for two wheelchair users to pass each other. Certainly, as the crowds grew, most of the spaces became tight for us all, but the available space for wheelchair users existed. Some booths had items higher than a standard table height, but most items rested atop tables. Similarly, the other areas of the convention (such as the game tournament room and the room for the celebrity question and answer session) had ample room for wheelchair access. The question and answer sessions with the celebrities did not include sign language interpreters, but I forgot that the events were occurring and I did not request an interpreter. The overall accessibility of the convention along with multiple patrons with visible disabilities in attendance made attending an event about channeling my inner geek an inclusive and fun event.