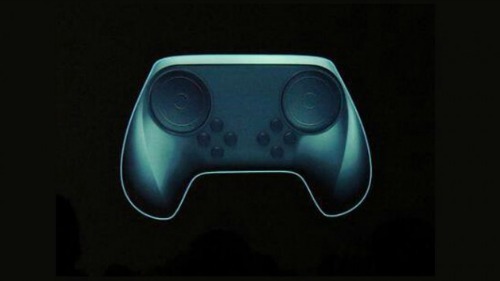 At the Steam Developer Days Conference Valve announced changes to the Steam Controller and that the controller will continue evolving before a final version is available at retail.

At the 2014 Consumer Electronics Show CES Valve stated that partner companies releasing Steam Machine can design individual controllers but as of now the only announced model is Valve’s in-house Steam Controller.

Depicted in the current controller rendering are two sets of four buttons in the diamond layout. Valve rearranged the ABXY buttons that were in square pattern at each corner of the touchpad into two diamond layouts alongside both haptic feedback controllers which more closely resembles the current Xbox and Playstation controllers. Possibly the second set of buttons will be a directional pad.

Other details include that the controller will run on standard AA batteries, connect wirelessly via Bluetooth and that a Steam Machines will support up to sixteen concurrent controllers.

Valve’s original announcement of the Steam Controller revealed a brand new potential controller with the removal of the analog sticks for haptic feedback in order to adapt the keyboard and mouse to a console controller. However, the features raised several video game accessibility concerns with its requirement for detailed fine motor skills.

The removal of the touchpad is a step forward in video game accessibility. Especially given the accessibility concerns present with the Playstation 4’s controller featuring a center touchpad that is difficult to use while simultaneously controlling gameplay for disabled gamers with fine motor disabilities. Josh Straub, DAGERS’ Editor-in-Chief, noted these concerns in his review of Killzone: Shadow Fall here and he was unable to play the game in large part to the required touchscreen use.

Additionally, the current controller shows two sets of four diamond layout buttons alongside both the parallel haptic feedback touchpads. With the mirrored controller layout and user customized button mapping the controller has the potential for one-handed gaming without needing third party peripherals.