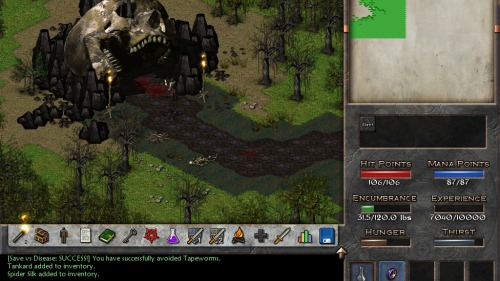 Basilisk Games is launching Eschalon: Book III next Valentine’s Day (February 14, 2014). The game will be available on Windows, Macintosh, and Linux platforms.

At release, the game will be for sale at Basilisk Game’s website here, where it will be available DRM-free. Recently, Eschalon: Book III was approved through Steam Greenlight, therefore on the same day or slightly after its release the game will also be available on most major distribution portals. In anticipation of the game’s release, Eschalon: Book III will conduct semi-public beta testing in early 2014 for fans ready to dive in early and help troubleshoot the game prior to its final build. If interested in the beta, more announcements will be posted in the future on Basilisk Games’ website.

Regarding the upcoming release, Thomas Riegsecker, CEO of Basilisk Games commented, “It is really an exciting time for us to see this project finished, and for everyone waiting to see how the trilogy comes to a close.”

Eschalon: Book III follows Basilisk Games’ mission to develop games that are “Single player. Turn-based. Stat heavy. Story driven.” Eschalon: Book I released in 2007 and Eschalon: Book II in 2010. The series features open worlds and deep character customization, but most importantly to Basilisk Games, a single player RPG experience. The final entry in the trilogy concludes the narrative arc involving the player’s clouded past and its connection with four mysterious gemstones. Yet, no experience with the previous two games is required to enjoy the last chapter.

As an RPG deeply inspired by the days of pen and paper gaming, the screenshots of the current build show a game depicting much of its experience through text. Text is given its own permanent window with an opaque black background providing clarity. Color coding differentiates the text’s subject matter (such as story narration, description of what actions occurred, and inventory management). The text even indicates nearby enemies and whether the foes are in the player’s attack radius.

The combat slows to a crawl when the player clicks on an enemy and chooses an action. Additionally, the game’s menus and icons are provided their own screen space, not overlaid atop the gameplay screen. This allows the menus to sit on set backgrounds, not on the ever changing gameplay screen, which maximizes quick readability. For disabled gamers, the trailer and screenshots of the upcoming game are indicative of a range of accessible features for physical and sensory disabilities.