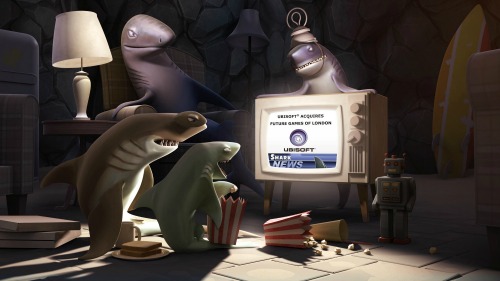 Ubisoft expanded its in-house game development studios with the acquisition of Future Games Of London (FGOL).

FGOL was established in 2009 and is a 41 person studio that develops free to play games for mobile and tablet platforms. FGOL’s portfolio star is the Hungry Shark franchise with Hungry Shark Evolution, the fourth and most recent iteration of the franchise, downloaded more than 30 million times. Regarding the new acquisition, Jean-Michel Detoc, Managing Director of Ubisoft’s mobile business, quipped, “With this deal, we’re biting off an even bigger part of the market for mobile and tablet games.”

Hungry Shark Evolution is essentially a free runner similar in concept to games such as Temple Run and Jetpack Joyride. Instead of the 2D background relentlessly racing past players are tasked with navigating the open water while staying alive and leveling up by eating prey. Hungry Shark Evolution provides accessible options such as choosing between controlling the screen by tilting the device or by touchscreen and instructions are communicated via text. However, the under the sea graphics with its blues and greens do not always provide clear visual contrast and navigating requires precision to avoid densely populated mines and jelly fish. The game is free to play allowing disabled gamers the opportunity to experience the game before spending money on the micro transactions for power ups and upgrades.


Do you play the Hungry Shark franchise?

Is the tilting the screen mechanic for mobile and tablet a gameplay mechanic that is accessible for you?