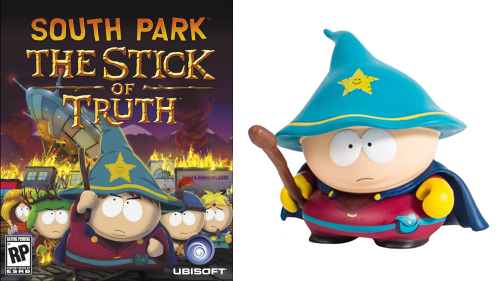 New York City Comic Con (NYCC) running from October 10 – 13, 2013 at the Jarvis Center in Midtown Manhattan now includes Ubisoft featuring the upcoming games South Park: The Stick Of Truth and Watch Dogs as well as the gaming competition The Next Level.

At the Watch Dogs booth Ubisoft is featuring the touted companion app, ctOS Mobile, and showcasing how the app accentuates the main game where the protagonist, Aiden Pearce, hacks into Chicago’s central operating system (ctOS) for control of city assets. The app is a real-time companion game that provides dual screen gameplay by pitting an app player against a friend playing the main game. The app’s adversarial mode invokes tower defense gameplay with the app gamer setting environmental barriers for the console player to overcome while racing to a series of checkpoints within a time limit. Preorders for the November 12, 2013 release will be available onsite via Amazon and includes an exclusive free t-shirt.

The Next Level competition, debuted at 2013’s PAX Prime, is a head to head gaming competition across a variety of games, genres, and platforms with overall winners daily. The daily prize is an ultimate gaming package featuring a Falcon Northwest Tiki gaming PC with a NVIDIA GeForce GTX 780, a next generation console package, and tickets to PAX East 2014. Ubisoft games featured in the competition includes Assassin’s Creed IV Black Flag, Just Dance 2014, The Mighty Quest for Epic Loot and a mystery game for the competition’s final round. Competition games are unreleased titles allowing players of all skill levels to participate without any player having previous experience with a game.

The Next Level will be live-streaming NYCC including demos of titles of participating developers here. Ubisoft will demo Tom Clancy’s EndWar Online and Might & Magic Duel of Champions Online Card Game.

Gamers with physical and sensory disabilities understand that what is routine travel for the able bodied often requires advanced notice and preparation. Accessibility options provided at Ubisoft’s booths and for participation in The Next Level competition are unknown.

Possible accessibility concerns include: Are disabled gamers able to experience available games with their own modified controllers (not necessarily for competitions) or able to customize controllers provided? Are the features at the booths and competition area wheelchair accessible? Are sign language interpreters available, perhaps upon request, for interacting with the booths and competition directions or are instructions and other information clearly available in text? Are captions or subtitles able to be enabled in the games available for play? Will live captioning be available for the live streaming?

Do you attend gaming events?

If so, what accessible or inaccessible moments have you experienced?