Trials Fusion, The Sequel To Trials Evolution, Is Now Available 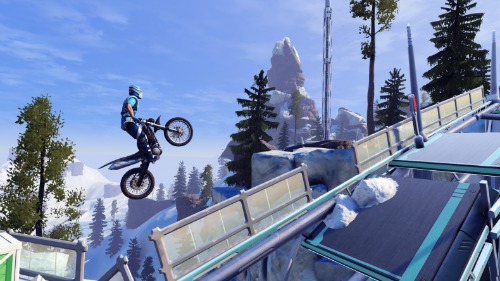 Trials Fusion, the follow up to 2012’s Trials Evolution, is now available on Xbox One, Xbox 360, and Playstation 4.

The PC edition will release on April 24, 2014. Trials Fusion was developed by RedLynx in conjunction with Ubisoft Shanghai and Ubisoft Kiev.

Trials Fusion is a digital download for $19.99 for all platforms or available at retail bundled with a Season Pass and bonus items for $39.99 for the Xbox One and Playstation 4. Trials Fusion returns players to the physics based gameplay of extreme bike riding on increasingly punishing courses while adding a new FMX trick mode. Players can choose to race alone, against friends in local multiplayer, or against the international online community but players are always competing for control of the leaderboards by vying for a course’s top time. Additionally, editor mode allows for community made tracks that are shared online.

Additionally, Trials Frontier recently released on iOS as a free to play touchscreen game in the Trials franchise. An Android edition will release at a later date. Trials Frontier’s gameplay is a preset controller scheme of four inputs. Two arrows for backwards and forwards are on the screen’s bottom right and two arrows for lean backwards and lean forwards are on the lower left. The preset controls require simultaneous two-handed use due to the placement of the arrows on opposite sides of the screen. The options don’t include alternate control schemes. However, as a free to play game, the game is playable without spending money which allows disabled players to assess the game’s compatibility with their disability related needs before making any purchases.

Trials Fusion includes a free trial for all platforms except for the Xbox One.

Trials Fusion’s gameplay is based on a preset control scheme that focuses on the gas on the right trigger, brake on the left trigger, and leaning – forwards or backwards – on the left analog stick. A voice over narrative is subtitled and the player can choose whether to turn on Rider Voice and Announcers which aren’t subtitled. Volumes for Music and Sound FX are adjustable.

The Xbox One edition is noticeably missing a trial version which gives disabled gamers firsthand experience with the video game’s accessibility before purchasing. The Xbox One launched with the decision to bring all games into one hub rather than separate games based on classifications. The primary distinction, that remains on the Xbox 360, was whether a game was a digital download only (Arcade) or a full release also available at retail (Games on Demand). A byproduct of the Xbox One’s design change was the removal of required free demos for all Arcade releases. Games can include a free trial on the Xbox One, the feature is simply no longer required for any title.

However, Trials Fusion pointedly provides the free demo on all of its platforms except for the Xbox One. Only disabled gamers playing on the Xbox One are unable to assess Trial Fusion’s accessibility with their disability related gaming needs. The reason for omitting the free trial on the Xbox One remains unclear.