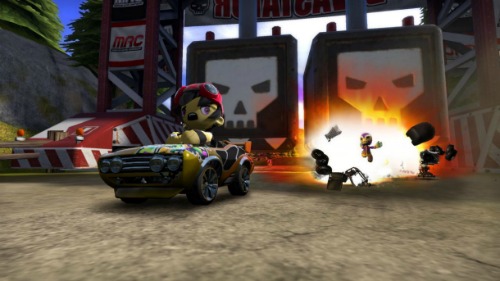 A couple weeks ago we revealed a list of the top five sleeper franchises. As a follow-up to that, we thought it would be fitting to focus on three one-off games that deserve a sequel. For the sake of definition, DLC and handheld versions of console games do not count as sequels. Here are our top three.

Sony’s answer to Mario Kart, ModNation Racers was a goofy, arcade-style combat racer that let players duke it out with each other using tricked out cars that fired rockets, laid down mines, and disabled enemies with EMPs. The cool thing about ModNation Racers was that there was a ridiculous amount of customization. Each driver could be reskinned and clothed in a way that suited the player’s own personal style. But that was only the beginning. There were nearly limitless combinations of parts to augment one’s car, and players could even upload their creations to PSN. Sony implemented the same practice with course design, giving players a full suite of tools to design tracks and courses to then upload and share with their friends. The result is that every player who played this title had a vastly different experience than their peers. From the standpoint of accessibility, ModNation Racers exemplified what it meant to create a forgiving arcade-style racer that was reasonably accessible for all forms of physical disability. If Sony saw fit to make a sequel instead of simply porting it over to the Vita, they would provide players with another experience unrivalled in the cart racing genre.

Dishonored
This relatively new stealth RPG was a serious candidate for my favorite game last year. The gameplay and visuals are so polished as to immerse players in the gritty world of Dunwall. But the truly impressive thing was how flexible Dishonored was. There were no set paths to an objective. Rather, players were given an impressive suite of tools that made them feel like demigods able to combine powers to work through any situation in whatever way they saw fit. Because of this game’s high level of flexibility and emphasis on rewarding stealthy, non-lethal playthroughs, it posed fewer barriers to gamers with disabilities than other comparable games. If they so choose, Bethesda could take this formula, stay true to the original elements, and create yet another experience that most gamers are able to enjoy fully.

Finally, we come on to one of the great cliffhangers in gaming history. Star Wars: Republic Commando was probably the first game I beat on anything more than easy difficulty. The premise was taking a squad of four cloned commandos through the events surrounding the Clone War. The gameplay was executed using a squad base mechanic. Players directly controlled Boss, the squad leader, and issued commands using a stop-action system not dissimilar to The Bureau: XCOM Declassified. As a result, disabled players could engage in all the frenzied action of a first person shooter, yet still have the option to pause the action at will and cue up orders to be executed automatically by his squad mates Scorch, Sev, and Fixer. The game offered an unprecedented blend of the tactical and first person shooter sub-genres. But the real reason it deserves a sequel is because of its story. The final series of missions places players in the events of the Battle of Geonosis, seen in Star Wars Episode II. At the very end of the final mission, one of the most beloved characters in the game appears to have died, and the members of Delta Squadron have to go and retrieve him just before the credits roll. There was a plan to make a sequel, but LucasArt cancelled it. If a new developer brought it back, they would not only be reviving a great shooter, but also an incredibly accessible one.