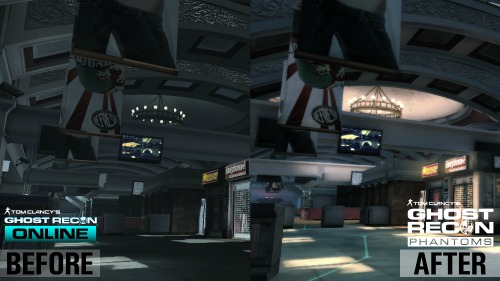 Corey Facteau, producer of Ghost Recon Phantoms addressed the name change by explaining, “The end of the open beta is a new start to the game. The difference between where the game started and the game today is so considerable that we felt we should mark it with a fresh identity.”

With feedback from five million players throughout the open beta the changes are intended to introduce new players into the world while providing further depth to veteran players. Players who participated in the open beta will carry over their progression into the final game.

Changes most notably include the following:

A new narrative based on the interplay between the Ghosts and the Phantoms.  Phantoms are rogue Ghosts with a variety of agendas that range from idealistic differences with the fight to turning warfare to a profit.

Matchmaking now factors in both character skills and gear in order to provide equally matched multiplayer bouts. Considering gear in matchmaking particularly assists with ensuring fair matches regardless of whether or not players used microtranscations to purchase gear and upgrades. Additionally, the “Mod Master” and weapon camo systems will allow for increased character customization.  More information about the customization systems will be available later this week.

Ubisoft Singapore will continue supporting the game post-launch with new features and weapons. In development now are tactical insertions and smoke grenades for later implementation into the game.

With less than a month until the official release Ubisoft is launching a series of events to commemorate the milestone, including a Veteran Rewards Program that gives beta players the opportunity to earn $30 in in-game money. For more information about the upcoming release, see Ubisoft’s interview with Mr. Facteau here.

The two year open beta and ongoing tweaks is a new business model that is most notably occurring in the video game industry for the more complex free to play games. For disabled gamers, such a business model supports players’ feedback for gameplay changes that increases disability accessibility, while simultaneously providing the option to obtain the necessary gear and skills for a disability related need by directly purchasing the upgrades rather than grinding through inaccessible gameplay.