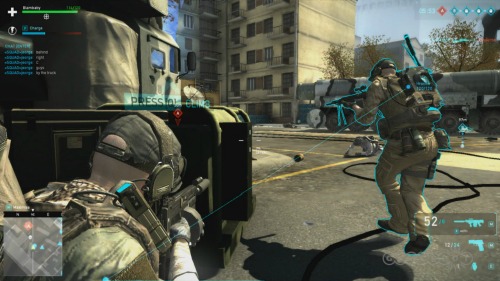 Tom Clancy’s Ghost Recon Online is releasing on Steam, beginning with availability in Canada through Steam Early Access followed by a worldwide release in spring 2014.

Currently, the third person tactical shooter is available in open beta on PC and is free to play. Ubisoft Singapore continues refining the gameplay based on the feedback of more than four million registered players. Online matches involve 16 players with a focus on teamwork. Players choose between three Classes: Assault, Specialist, or Recon to correspond with their preferred playstyle. Each Class includes unique unlockable weapons and other equipment. Experience nets Requisition Points for unlocking gear, or players can purchase Ghost Coins separately. Both currencies can be used in the game store.

Ubisoft Producer Corey Facteau noted, “Bringing Ghost Recon Online to Steam has been our goal since the game’s inception. We took the time necessary to reach a quality level that can go head to head with the best online games available today before releasing on Steam.”

Mr. Facteau continued by explaining that use of Early Access is for continued improvements to the gam, in order to provide a polished gameplay experience. Additionally, fifty percent of the user base consists of multiplayer online battle arena (MOBA) fans due to the team-based nature of the gameplay.

Ongoing refinement in an open beta for a free to play game gives disabled gamers an opportunity to give their input for video game accessibility prior to the game’s final release and without out-of-pocket expenses.

For disabled gamers who require visual cues, Tom Clancy’s Ghost Recon Online adds such a layer to third person shooter gameplay. For example the universe’s tech provides visualizations via outlines of teammates and opposing players along with visual lines connecting teammates for a fast read of who is nearby. An onscreen timer also ticks down the time needed for reloading, and the game featuers an option for onscreen text chat. Upon death, tactical information provided includes listing the damage the player incurred as well as a diagram of the shots with the killing blow marked by a skull. While waiting to respawn, a map shows the real time location of the players in the match.