This Weekend Is Tiltify’s League Of Legends Charity Tournament 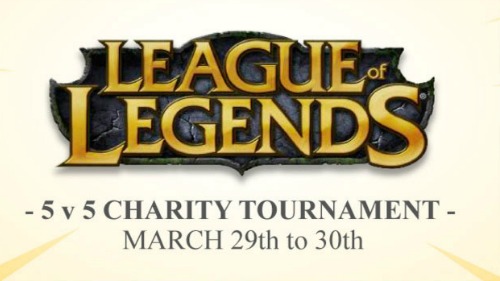 This weekend from Saturday, March 29 to Sunday, March 30, 2014 Tiltify is hosting and broadcasting a League of Legends five versus five charity tournament to benefit the American Red Cross.

The grand prize is a team trip to the North American League of Legends Championship Series Live in Los Angeles, California that takes place from April 5 to April 6, 2014. This weekend’s 48 hour marathon event benefits the Red Cross in celebration of March as Red Cross month by donating the $24 team entry fees to the American Red Cross.

The Shoutcast will be live by Malfusx.

Teams can register here for $24. From the entry fee, $4 is payment for the processing transaction fees and $20 is donated directly to the Red Cross. Each entry fee provides the Red Cross with funds for a full day of hot meals during a disaster or a comfort kit with food and blankets.

Tiltify is a new company whose sole purpose, using gaming for raising money for charities, is expressed in its tagline, “Play a game, Change a life.” More information about Tiltify is available here and the tournament will be broadcast on Tiltify’s Twitch channel here.

Charity tournaments highlight how the gaming community comes together to support charities while gaming together. Such events speak to how gaming provides disabled gamers with an online camaraderie that may be difficult to attain in real life due to disability related barriers. Whether as a League of Legends team player or as a spectator, disabled gamers can participate in such events. Certainly, for visual disabilities as well as the deaf and hard of hearing the absence of descriptive audio and subtitles doesn’t allow for fully accessible viewing of the tournament. But for disabled League of Legends players, the tournament provides an accessible venue for giving back to the community.