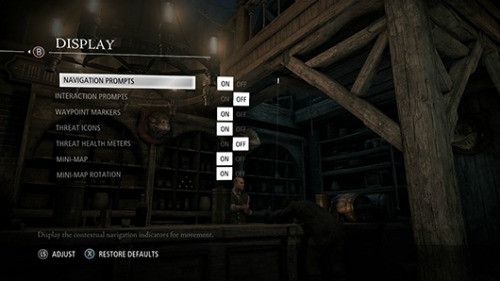 Eidos Montreal released a seventeen minute gameplay clip of Thief showing the first mission where Garrett the Master Thief is enroute to his safe house, the Stonemarket Clocktower, but is distracted by an open window into a jeweler’s shop. Thief releases on Februrary 25, 2014 for the Playstation 3, Playstation 4, Xbox 360, Xbox One, and PC.

Jean-Philippe Chicoine, the Marketing Coordinator, played through the mission following the tutorial in an unedited walkthrough. The video is available here.

Mr. Chicoine’s gameplay is touted as one of many viable options for completing the mission. The walkthrough is stealthy but dubbed Opportunist by the game due to his usage of the environment for sneaking throughout the City.

Mr. Chicoine commented that his personal UI settings includes disabling the lockpick helper in order to pick locks based solely off of the controller’s rumble. The lockpick helper shows an icon that corresponds with the controller’s rumbling that signals when to press the right trigger. Additionally, easy, normal and hard difficulty levels are available alongside gameplay mods such as Chapter Saves Only, No Focus, and Stealth Takedowns Only.

Thief highlights stealth which as a gameplay type commonly provides multiple gameplay options that allows disabled gamers gameplay that meets their disability related needs. For fine motor disabilities, according to Thief’s forums, a playtester attests to no customizable controls on the consoles and lists the controller’s button layout which is available here. However, in response to criticisms of the game’s E3 demo, Thief does not utilize any Quick Time Events.


For visual disabilities, the level shown featured a dark thunderstorm that was punctuated by flashes of lightening. The interplay between light and dark is used to great effect but does require constant visual assessment of the environment. For example, while lockpicking Garrett can continue looking around in order to know if an NPC is approaching. Garrett prefers the shadows with an arsenal that includes water arrows for putting out flames but stealth based approaches allow gamers with visual disabilities to proceed slowly. The text is small and while often clearly readable against the dark environments a bolder font would provide more consistent clarity.

For deaf and hard of hearing gamers, the in-game subtitles were not enabled which prevents ascertaining how the subtitles assist with audio cues. Such as whether subtitles provide straightforward dialogue, information about who is speaking and/or an indicator of the speaker’s location (possibilities include the speaker’s proximity or general location) and audio cues. Visual cues incorporated into the gameplay includes the use of dark and light resulting in shadows that accurately depict the movement and location of NPCs.