The Xbox One Truck Came To Pittsburgh! 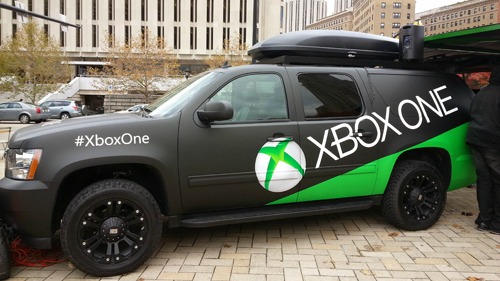 In anticipation of the Xbox One’s launch on November 22, 2013, Microsoft launched a fleet of trucks across North America tricked out with Xbox One consoles. On Friday, November 8, 2013, a Xbox one truck came to me in Pittsburgh, PA!

The morning of the truck’s arrival was cold. My winter coat, scarf, gloves, and I braved the freezing winds but with an hour until the truck’s appearance I stopped into a nearby Dunkin’ Donuts for a hot coffee. Ten minutes before the 10:00 AM start, I spied the truck in Schenley Plaza, an open outdoor congregation area, and pulled up on the cobblestones alongside the tables and chairs. A handful of people, around five to six, stood around the truck waiting.

The truck was more of a van but recognizable in matte black and Xbox green emblazoned with the Xbox One name. The back of the truck opened for a contraption that extended directly backwards with six attached television screens and two controllers per screen. During the setup, a console was attached in the middle space as a promotional display. We crowded around the screens in a semi-circle waiting for the moment to play. A man in the crowd wore an Xbox One track jacket with an Xbox One backpack, a young boy next to me wore a Halo: Reach winter hat, and a young man played on his Vita. We watched while the controllers’ wires were unwound and the television screens were switched on.

The television screens were affixed to a hanger that appeared at a fixed height of about four feet from the ground. The controllers sat beneath each screen with a generous wired connection, presumably for charging and to prevent their disappearance. Based on what I saw, I do not think that the screens could be lowered upon request for a person in a wheelchair, and their height required looking up but the controllers were within reach.

A screen near me came to life, and I saw the Xbox One dashboard. The familiar tiles sat in a more horizontal configuration with the largest tile on top, noting the game queued for playing. On the Xbox 360, the largest tile is an advertisement. A truck employee moved through the menu, and I squealed in surprise.

In the settings a tile was labeled “…” (which typically represents “set up”) and the tile read “Closed captioning.” On the Xbox 360, I have felt more and more left out as a deaf gamer because the increasing apps and their accompanying videos are most often not closed captioned. The app announcements for the Xbox One left me exasperated and internet-searching for what apps are offering closed captions nowadays, but for each app the closed caption availability differs from device to device, leaving me uncertain until I own an Xbox One. I have no idea what the closed caption tile exactly enables. The mere sight of the phrase on a dedicated tile gave me more hope than I had for the Xbox 360’s entire generation of new app announcements.

However, an error screen flashed, “DHCP connection failed.” We groaned. The man in the Xbox One track jacket stepped up to the screens (he was actually an employee) and he took screenshots of the error message. Another truck employee talked into the microphone asking who among us have experienced inexplicable console errors. We were not amused but we stayed. Cold and shivering we waited for an hour bracing ourselves with each gust of wind. Roughly 25 of us waited, and the majority of the crowd was easily men with one, maybe two other women besides myself.

Finally, the consoles ran smoothly. The employee informed us that the available games were Forza Motorsport 5, Killer Instinct, and FIFA 14. He instructed us not to request other games such as Call Of Duty: Ghosts, Dead Rising 3, and Ryse because those games are rated Mature and therefore are not allowed for public playing. The first person in line was granted his choice of the available games to play. He replied that he did not mind which game he played and the crowd groaned. He finally settled on Forza Motorsport 5. The next pair chose Killer Instinct and I ran to get in line behind the two.

While waiting, I watched the opening for FIFA 14 and appreciated the individuals in the roaring crowds. Watching a Killer Instinct fight between Sabrewolf and Jago unfold was fantastic and complete with the combo announcer screaming in the background. The initial two players set up the play as if we were in an arcade. The winner kept the controller and a new challenger stepped up. The second fight was a battle between Chief Thunder and Glacius. The entire fight was neck-and-neck, with the final punches thrown while both players’ health flashed red. The crowd cheered.

Next was my turn. I held the controllers, and my hands were so frozen that I could hardly feel the controller. Accidentally, I chose a rematch with the same characters. I fought and tried, mashing buttons with a general sense of the most likely actions for each button. I lost. The controller felt good with the matte finish providing a nice grip compared to the glossier finish on the Xbox 360 controllers. The familiar battery pack bump was gone.

The crowd grew, and easily the longest line was for Killer Instinct. Forza Motorsport 5 was for one player, and its start-up kept each player on the controller for awhile. FIFA 14 attracted players who were familiar with the controls, and those of us unfamiliar with the game’s layout stayed away.

While stamping my feet, I realized that I was still freezing, and I headed out. Personally, an Xbox One is not reserved for me on November 22, 2013, due to my bank account’s protest. Nevertheless, I loved the opportunity to jump into the pre-release hype crowding on a park’s cobblestones during a cold morning while shaking my head at a passerby’s question of what we were there for.

Is an Xbox One truck coming near you in the remaining two weeks before the console’s release? You can check out the schedule here.