The Voxel Agents Considered Accessibility In Development Of Puzzle Retreat 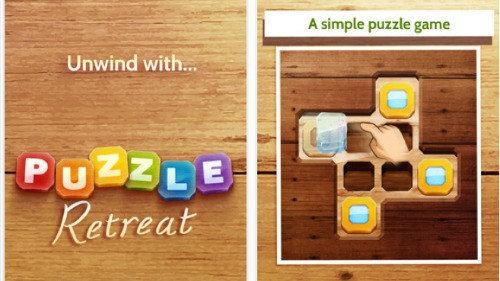 The Voxel Agents’ puzzle solving app game, Puzzle Retreat, which won the Accessibility Award at the 2013 Game Developers Awards, is now available on iOS and Android as a free download.

Puzzle Retreat is a puzzle game that tasks players with maneuvering blocks on a board until all of the spaces are filled. Blocks have different properties, such as sliding atop previously placed blocks, arrows changing the block’s direction, or a stop block that does not allow other blocks to slide past. Gameplay consists solely of players swiping and tapping blocks on a touchscreen.

During game development, The Voxel Agents considered common complaints about puzzle games which include the need to follow complex text-based instructions as well as small icons and/or graphics. As a result, Puzzle Retreat purposefully uses large icons that convey meaning both in color and shape for clear differentiation. Written text is included, but the game is playable without following any written instructions. Additionally, puzzle games are often coupled with time limits and associated penalties. Puzzle Retreat gives the player control over setting the game’s pace with no time limit and the option at all times to redo previous moves all the way to the beginning. The game is marketed as a relaxing puzzle game that allows gamers to enjoy puzzle solving rather than making them rush for answers. Under the hood, the block detection radius is purposefully forgiving, allowing gamers with fine motor disabilities easy control over the blocks. The gameplay is not centered on complex gameplay maneuvers but on players using their brains to move blocks in the correct direction and in the needed order so as to solve the puzzle successfully.

The download is free with two level packs of games available to play. Additional level packs with names such as Piano and Chocolate are available for $0.99 each or in a six pack special for $2.99.

Games built with disability accessibility in the design process from the beginning typically provide a seamless accessible experience. Puzzle Retreat navigates a tricky balance of providing accessibility for multiple disabilities while not differentiating the game from the mainstream market. The game provides multiple accessible features while maintaining the complexity of puzzle solving. The puzzles grow in complexity as the levels progress, but the difficulty does not add new gameplay other than understanding the properties of each block type. Blocks are differentiated by colors and icons while experimentation is encouraged with no penalty for the wrong move, simply requiring a screen touch to redo the last move. The Voxel Agents’ inclusion of disability accessible features from the game’s initial development is clearly evident.