The Omni, The Oculus Rift Peripheral, On ABC’s Shark Tank 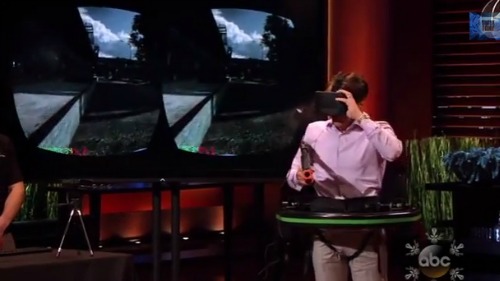 The Omni is used in conjunction with the Oculus Rift virtual reality headset for deeper immersion into gaming by allowing gamers a full range of motion from walking to running (to jumping to strafing to crouching) rather than remaining seated while gaming.

Virtuix requested $2 million in exchange for 10% equity, which valued the company at $20 million. The price of the Omni was announced at $499 as a peripheral for virtual reality headsets. The valuation was explained on the basis that the Oculus Rift is projected to sell 500,000 units in the next year. If the Omni is sold to one in every twenty Oculus Rift owners, Virtuix nets $12.5 million thereby grossing over $20 million within the next two years.

While the Omni successfully raised $1,109,351 out of a $150, 000 goal on Kickstarter in July 2013 (with an estimated May 2014 delivery date of the roughly 3,000 Omnis for Kickstarter backers), the Shark Tank was unimpressed with such a high valuation on a company that has yet to deliver the actual product to its backers.

Shark Kevin O’Leary (a.k.a. Mr. Wonderful, due to his proposals often including perpetual royalties) criticized the investment opportunity, saying, “I’m just trying to look at the sheer number. You want me to pay your value two years from now today.”

The Omni resembles a circular treadmill and includes safety equipment a safety ring, which harnesses the player within the Omni to prevent falls and keep the player in one place. As of now, the safety ring supports up to 285 lbs. The Omni’s low friction surface requires the use of shoes that have a special low friction sole. An optional attachment is the Omni rack that holds items such as a keyboard and mouse along with the virtual reality’s control box or base station nearby on the Omni itself.

Other criticisms included the size of the Omni, requiring valuable space both in the home and in retail space for sales in brick and mortar stores. The requirement to stand and physically move while gaming is said to make its use more of a one-time novelty rather than a device for extended play. As for the cost, the Omni is a peripheral requiring a virtual reality headset and additional accessories, such as the featured gun controller. All are sold separately. At a minimum, the Oculus Rift costs $300 and the Omni is priced at $499, thus requiring at least an $800 entry price. Additionally, if the current sales projections are accurate, there are concerns that future technology will stagnate sales of the Omni within the next six years.

Mr. O’Leary ultimately declined to make an investment, stating, “I see where you’re going with it, but it is a subsegment of a subsegment market, and it’s very expensive…There’s too much risk between your delivery of a consumer product, a retail-distribution strategy, and your sales. You got tons of risk – all kinds of risk and I got to pay tomorrow’s price today.”

The entire Shark Tank opted out of the investment opportunity, with the final footage rolling while Shark Robert Herjavec asserted that, “Gamers are lazy like most human beings. They don’t want to exercise.”

Watch the entire episode on ABC.com here. Closed captions are provided on the internet stream of the program.

Gaming is notably a sedentary pastime with notable exceptions, such as what the Omni wishes to become. The requirement to move bodily while gaming is inherently inaccessible for gamers with a mobility and/or a fine motor disability.

Additionally, the use of virtual reality headsets, particularly the Oculus Rift, for disabled gamers remains untested. Multiple firsthand accounts state that the Omni can be used successfully with players wearing glasses. How the Oculus Rift interacts with hearing aids is unknown. For example, it is unkown how the Oculus Rift sits on the head of a player wearing hearing aids or a cochlear implant. Additionally, the ease of reading text such as the menus in the User Interface and subtitles in virtual reality is unknown. Virtual reality gaming has many unknowns which disabled gamers must consider before adding a peripheral to the new technology.