The Marks of an Accessible Arcade Fighter 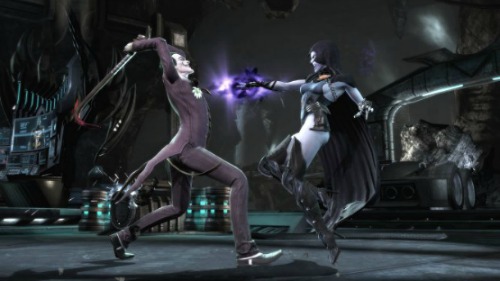 Recently, DAGERS gave Injustice: Gods Among Us the first barrier free rewarded to an arcade style fighter. In some ways the game is a landmark in the genre, because it perfectly illustrates a reasonable level of accessibility for a game genre that has been around since video games first became popular. Injustice does this by embracing five out of the six features that are crucial in making the arcade style fighter reasonably accessible.

First, the most crucial feature to making any game accessible (but especially the arcade style fighter) is one that Injustice embraces whole heartedly: fully remappable controls. Games like Injustice, Mortal Kombat, and Tekken all rely heavily on combos—the rapid button taps that allow characters to unleash their most powerful attacks in combination. The ability to remap controls ensures that a player will always be able to position the buttons they need together, thereby making performing combos much easier. The one problem that most disabled players will run into is when combos require use of the joysticks as well as the buttons on the face of the controller.

The second most important feature in making a game accessible is lots of different characters. It’s not enough to have a variety of characters that look different but all play the same. Accessible fighters need to have a spectrum of characters with slow, heavier-hitting characters on the one end, and fast, “wimpy” characters on the other. Consider the original Mortal Kombat. Most people who played it will agree that there was really only one character with seven different skins. All the characters moved at the same speed, had the same reach, and performed basically the same moves. To be fair, that’s an illustration way out of its time, but it is an example of an arcade fighter with not enough character choice to be accessible.

Just as important as the number of characters is the amount of extra content in the game. Although this is one feature that almost all modern fighters nail pretty well, it still deserves to be mentioned. The reason is, there is always the chance that either the disabled gamer’s stamina will give out or that they will reach a sudden drastic increase in difficulty. If this happens, gamers need to have the option to enjoy the game in other modes. For instance, if you are struggling with a particular chapter in the Injustice story, they always have the option of going and playing one of the 24 battle modes for a different experience. They can set them to any difficulty level, and enjoy them even if the game is making them tired.

This feeds directly into the next two features that make an arcade style fighter accessible. They both have to do with the idea of difficulty. First, the difficulty has to be scalable. Having a game that requires all players to play on the same difficulty level is just as inaccessible as if the developer includes only one control scheme. Different disabilities can have different challenges with speed, and because the arcade style fighting genre is pretty universally based on speed, it is important to have difficulties that allow slower players to excel. It is also important to allow players to adjust difficulty on the fly without quitting the ladder. A good example of this would be the Soul Calibur series, which allows players to “Try Again on a Lower Difficulty” if they fail a match.

The final aspect that injustice nails so well (and the final aspect of difficult that aids in accessibility) is the concept of even difficulty progression. The best way to see this in Gods Among Us is to compare it with NetherRealm’s other most recent fighter, the reboot of Mortal Kombat. The difficulty in that game progresses evenly up until the final fight with Shao Kahn. Up until that point in the game, the difficulty had progressed evenly. Each fight had required a little more speed, and a little better defense. And even if they had to spam throw buttons or span throws, most players could progress through the game on medium with very little difficulty. However, when you reach the final level in the story mode, it was practically unbeatable unless players were really capable Mortal Kombat fighters. Liu Kang couldn’t throw Shao Kahn, and Kang was too squishy to stand toe to toe with the emperor of Outworld, so players had to resort to his long range kicks and fireball attacks, which were hard for disabled players to execute. By contrast, Injustice has a very even difficulty progression in its story mode and ladders, meaning that most players won’t hit a difficulty wall even when fighting the final boss.

The one feature that makes fighters accessible that Injustice does not have is preset combo buttons—buttons that are set aside to stand in for small combos. An example of this would be in Tekken Tag Tournament 2, where players can remap the trigger and shoulder buttons to stand in for virtually any two button combo on the face of the controller, which makes it easier for disabled gamers to do combos and, thereby, win.

Now I know I said there were only six features of an accessible arcade fighter. But there is one “bonus” feature. This one is not a requirement, but it does make the game vastly more accessible when it’s available. If the game ships with a fight stick, it gives disabled gamers an affordable way to buy the one peripheral that vastly improves this genre’s accessibility. And the fact that the Injustice Battle Edition shipped with a fight stick small enough to fit on most wheelchair lap trays makes it even more accessible and shows why this game could be considered the model for arcade style fighter accessibility.