The Disabled Gamers’ Look Back: Gears of War 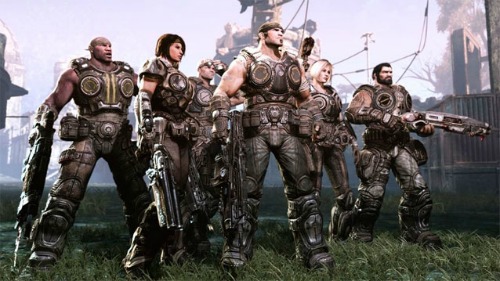 The Gears of War franchise is an Xbox mainstay that defined a console generation as a third person shooter anchored in co-op play.

Bullets fly and popping up from behind cover while slowly moving forward or flanking the enemy in tandem with a partner, whether human or AI, is the game’s strategy until only combined firepower will take down the final hulking beasts. The slower pace of the characters, even when running, combined with a focus on shooting from cover and working in a team is a more accessible shooter than most.

The Gears of War franchise is centered on co-op play and this game design perspective permeates the single and multiplayer modes. In the single player campaign swarming hordes of increasingly dangerous Locusts and Lambent, the alien threats, are held back with a partner. In multiplayer, the most famous modes are known for teamwork with victory dependent not on high kill/death ratios but on team survival. The lone wolf is not successful on the planet Sera which is even evident in the narrative where the burly shooter interjects bloody firefights with stories about two brothers who are searching for a missing father and a wife. The cut scenes that play after successfully mowing down waves of enemies are about the break-up of families through the distance and destruction of war.

For disabled gamers the shooter genres often defaults with inaccessible gameplay due to a real-time reaction required in response to the onscreen chaos from twitch gameplay to an instantaneous response to visual or audio cues. The Gears of War franchise slows down the shooter combat and gives disabled gamers the opportunity to participate in the firefight with gameplay that best suits their disability related needs, particularly in the series’ co-op and multiplayer options. Co-op allows disabled gamers to play through the single player campaign with a friend for able bodied assistance while the multiplayer modes are grounded in the slower gameplay that encourages cover and strategy.

The public face of the Gears of War franchise often centers on its inaccessible gameplay. Such as the melee chainsaw takedowns that require the Quick Time Event of mashing the B button, emptying cartridges into a single enemy for a successful kill which involves extensive time shooting the target’s limited weak spots, and the acclaimed active reload feature that is based on a timed press of the Right Bumper for an edge on reload speed.

This gameplay shows a shooter with complex controls that most likely provides limited controller layout alternatives for fine motor disabilities (true), chaotic onscreen action that is difficult to discern for visual disabilities (true due to a thin white aiming reticle that changes to red in a game with a red and black color scheme), and for deaf and hard of hearing players the co-op teamwork relies on quick responses to audio cues (true for players dependent on voice chat).

Yet, Gears of War includes inherently accessible gameplay as well.

Enemy bullets kill quickly. Waist high cover is central and capturing the big guns requires a slow uphill slog while enemy fire rains down. Despite the presence of guns, moving from cover to cover and finding the openings to jump forward or into a flanking position are required strategies. The slower pace for a shooter allows for more time strategizing and carrying out a plan. Hunkering down and assessing the battleground is a viable option.

For fine motor disabilities, Gears of War does include iron sights and iron sights requires two handed controls. Wild fire is possible by shooting overtop the cover without aiming but taking down enemies requires aiming. Unloading entire cartridges into a tough enemy for the kill requires positioning the reticle correctly for an ongoing length of time. Additionally, the base gameplay of strategizing for reaching the high ground or clearing an area often changes for boss battles. In boss battles dodge rolling around a one or two hit kill boss while firing on the boss’ weak spots is often difficult. Especially with gameplay that is not otherwise centered acrobatic dodging.

At the same time, the Gears of War franchise is rooted in co-op gameplay. The single player campaigns are playable with a co-op partner and AI assistance is available when a co-op partner is not. From the first game, the narrative about relationships whether between brothers or fellow soldiers is bolstered with surviving firefights alongside another player. Co-op includes revival by teammates making death not necessarily game ending if the player is revived in time.

The multiplayer modes further strengthens the co-op based gameplay with the famous Horde mode and the newer Overrun mode pitting teams of players against enemy waves and other modes playing off of concepts of teamwork.

Gears of War: Judgment, the most recent installment from 2013, supports working alongside other gamers in class based roles. 2011’s Gears of War 3 supports individual customization. Both games feature active online communities for the most popular multiplayer matches, Team Deathmatch and Horde/Overrun modes. Unlocks are largely based on cosmetic skins and character models rather than on weapons and equipment. Players are provided the same baseline weapon load out with more powerful and specialized weapons scattered on the map for pickup.

The slower pace of the game characters more easily groups players into default teams. Even without verbal communication, teammates more naturally group together than in faster paced shooters.

The new Overrun mode puts players in teams of four battling either as COG (Coalition of Ordered Governments) soldiers against the Locusts, the alien enemy, or as the Locusts working to overrun the soldiers. Teams of four can all choose amongst different classes such as Medic, Soldier, Engineer and Scout. All classes provide different support and cues for the needed support are displayed visually. For example the Soldier provides additional ammunition and a flashing ammunition sign signals which players need ammunition. When respawning players can choose a new class and are shown which classes are already in use by their teammates which allows for new strategies during a single match. Non-verbal communication is provided to allow for teamwork without voice chat. Additionally, the multiplayer modes include a variation of the single player campaign’s ability to quickly see the locations of the other squad members with onscreen markers.

The more traditional Horde mode features unrelenting waves (50 waves in comparison to the 10 waves in Gears of War: Judgment’s Survival mode) with cash based upgrades available during the match. Defenses, higher powered weapons, and respawning all costs cash which is earned with successful kills and assists. Without at least a modicum of teamwork, the match is quickly over.

Epic Games was a beloved home for the franchise during its current four game run. The inclusion of co-op in all modes, the invention of Horde mode in multiplayer, and memorable set pieces set a high standard for a console’s flagship franchise. Recently, the franchise passed to Black Tusk Studios for future iterations.

Gears of War continued to refine third person shooter gameplay throughout the Xbox 360’s lifecycle. Epic Games created a franchise for the Xbox 360 that Black Tusk Studios will grow for the Xbox One. As disabled gamers, we look to Black Tusk Studios to embrace and enhance the gameplay’s accessible components with an understanding of the gameplay that undermines the franchise’s inherently accessible features. With a few purposeful tweaks, the Gears of War franchise can set a new accessibility standard for shooter based gameplay.