The Destiny Beta Is Coming 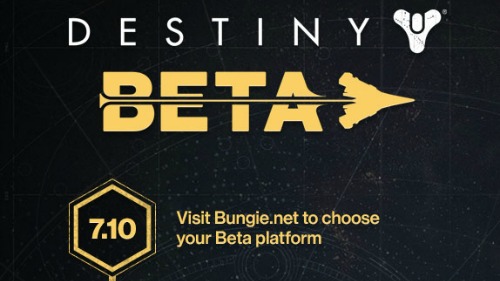 Destiny releases on September 9, 2014 but the beta will run from July 17 to July 27, 2014. While Destiny is releasing on Playstation 4, Playstation 3, Xbox One, and Xbox 360 the beta comes to Sony consoles first for a total of eight days while the Microsoft consoles will have four days of beta access.

Participating in the beta requires a Destinypreorder and a Playstation Plus or Xbox Gold account.

The Limited Edition bundles exclusive emblems and ship variants with a season pass for the two post-launch content expansions along with the physical goodies of a field guide, a star chart, and postcards housed within a SteelBook case for $99.99. The Digital Guardian Edition includes all the in-game items and the expansions price for a lowered price of $89.99. The expansion packs will be available separately for $34.99 for both or $19.99 individually.

The Ghost Edition may cost $149.99 but on top of the Limited Edition treats packages photos, a patch, stickers, and a Ghost replica with motion activated lights and voicework by Peter Dinklage.