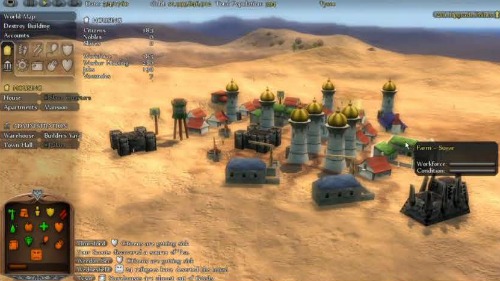 The player is a colonial governor tasked with establishing a successful community during a period of the unknown and war. The game features 20 missions that include unlockable skills and upgrades which are also usable in the sandbox mode. The player must keep the peace while improving and maintaining the town. Vying for the resources and new discoveries are nobles, monks, merchants, and rogues.

The game is an economic and trading simulation. Building interconnected farms, mines, and caravan routes while exploring the map for rare and exportable goods builds the local economy. However, competition arises with corporate rivals, bandits must be bribed or overcome in battle, or the player can aggressively raid others’ caravan routes in open warfare against opponents’ cities.

Spice Road has a Steam Greenlight page that you can view here. The game has a free demo available here or it can be purchased for $19.95.

Strategy games are often more accessible than most gaming genres due to turn based gameplay that even with a timer allows players control of the clock’s speed and little, if any, reliance on spoken dialogue or audio cues for successful gameplay. Oftentimes, accessibility concerns relate to a cramped user interface. Inability to resize small font in the menus obstructs access for disabled gamers with visual disabilities. Based on its trailer, the above appears to be true for Spice Road.

The user interface allows for pausing, playing, and fast forwarding the game time, but all gameplay appears centered on visual prompts (from building types highlighted with a yellow outline to various icons representing different actions and gameplay information provided in multiple onscreen menus). For all disabled gamers interested in experiencing the game prior to purchase, the free demo is available through the link above. Most notably gamers with visual disabilities will want to ensure that the required gameplay information is readable.