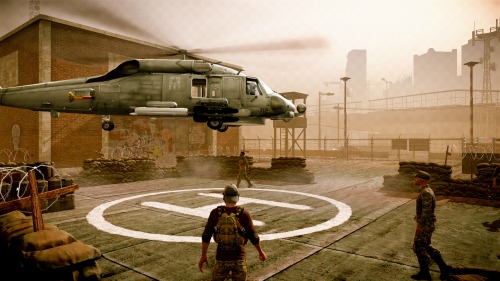 On May 30, 2014 State of Decay: Lifeline releases for $6.99 alongside the free title update that features Rucks in Trucks.

Lifeline is the second DLC for State of Decay and is releasing mere days before the one year anniversary of State of Decay’s June 5, 2013 launch.

Lifeline’s differentiation from the base game experience is a race against the clock. Rather than holing up in the home base for weapon repairs and heroes to rest. Lifeline tasks the player with locating and airlifting scientists and other important personnel who may be the difference in whether or not humanity is victorious against the zombie threat. New base building options changes the gaming experience which includes:

The Field Workshop, a new installation option at the home base that allows for instant weapon repair at the cost of the needed materials and upgrades to the Field Worlshop allows for transforming any ammunition into the needed caliber.

The Landing Zone allows the player to request a supply drop at their location from Headquarters. But dwindling supplies that don’t replenish doesn’t provide any guarantees that this option will always be available.

The Ops Center replaces the Library for conducting research but adds Tactics. Tactics gives the home base soldiers a task while the player is on a mission such as establishing supply lines, searching for lost soldiers, or taking the fight to the zombie hordes.

Perimeter defenses fortifies base defenses by deploying traps along the perimeter. Mines, propane tanks, and fireworks traps all can be strategically placed to thin the zombie horde but the zombie rush will be the largest scaled attacks within State of Decay. Additionally, new outdoor facilities provides power, a Generator facility, and keeps diseases at bay, the Latrine.

The title update is the fifth free update to State of Decay. The most prominent feature an oft requested option to store more rucksacks, other than the single rucksack that the player is carrying, into vehicles for transport back to the home base.

For video footage, check out a Twitch steam of Lifeline here from earlier in the week.