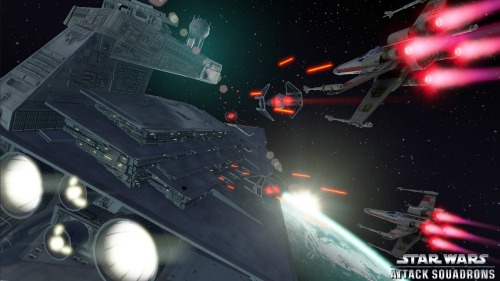 The game is a free to play online multiplayer space combat game that allows players to customize and battle iconic Star Wars spaceships. Up to 16 players face off in battles at well-known Star Wars locales.

The game’s features include three PvP modes, Free For All that pits 16 players against one another in a death match, Team Dogfight that tasks a team against an opposing team, and Base Defense that requires coordinating defending the home base or an attack on the enemy’s base. Other features include customizing Star Wars spaceships to player specifications, team play that allows friends to develop communities of Starfighter Pilots, and earned rewards that unlock new items and upgrades. Additionally, Star Wars: Attack Squadrons will receive monthly updates.

Gamers interested in participating in the beta can sign up here and see the game’s Facebook here. Note that beta testers are selected via a random process that does not guarantee all who express interest access into the beta.

Without gameplay, the accessibility of the game is unknown, but the game’s announcement shows that Star Wars themed video games are continuing development under Disney’s recent ownership.

On its face, the free to play business model, while criticized in some instances of becoming “pay to win,” provides disabled gamers with access into the gameplay for firsthand experience of the gameplay’s accessibility before making a purchase. Upon understanding the gameplay, microtransactions allow disabled gamers access to gameplay functions that mitigate disability related gaming difficulties such as twitch reflexes or a dependence on visual or audio cues. Potentially, Star Wars: Attack Squadrons will provide an accessible flight simulator multiplayer game that is set in the Star Wars universe.