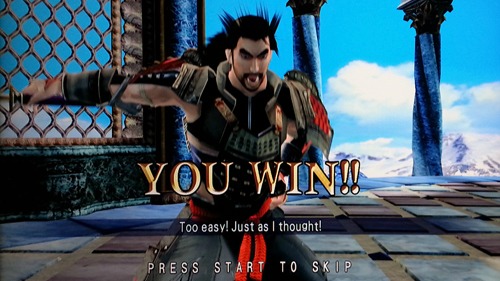 Despite the next generation buzz, reasons remain to power on your current generation console and one reason is the recent release of Soulcalibur II HD Online for the Xbox 360 and the Playstation 3. The release is a digital download available on Xbox Live Arcade and on the Playstation Network.

Soulcalibur II HD Online is developed by Project Soul at Namco Bandai Studios Inc. who updated the game with high resolution graphics and added online multiplayer. The game features a total of 24 modes and 24 fighters including favorites such as Mitsurugi and Talim as well as former console exclusives, Heihachi from the Tekken franchise and Todd McFarlane’s Spawn. Original modes include arcade, VS battle, time attack, survival, team battle, VS team battle, and practice. The new online modes are ranked match, player match, and leaderboards.

The game is priced at $19.99 on both platforms. An available free demo allows players access to arcade mode as Mitsurugi or Xianghua. While players can jump onto the next console generation nowadays, Soulcaliber II HD Online allows players a nostalgic return to a bygone gaming era as well.

Free demos are often a boon for disabled gamers because we are able to assess whether or not the available settings provides us with our disability based needed customizations. Soulcalibur II HD Online’s demo does not allow player access into all of the available settings. Most notably for Game Settings.

For gamers with fine motor disabilities, Controller Settings provide four available controller layouts for mapping attacks, blocks, and special moves. While no available settings offers subtitles or closed captions, the speech of the fights at the end of a round is subtitled which is unheard of in recent fighting games. However, the voiceover at the beginning of each round is not subtitled. For visual disabilities, the character models are clear with noticeably less screen clutter during fights in contrast to the current norm of constant special effects in fighting games. On screen prompts are reminiscent of arcade style text with its blinking and skinny white text that can be difficult to read.

Luckily, disabled gamers have access to a few rounds in arcade mode in the free demo to best assess the game’s accessibility for their individual disability related needs.