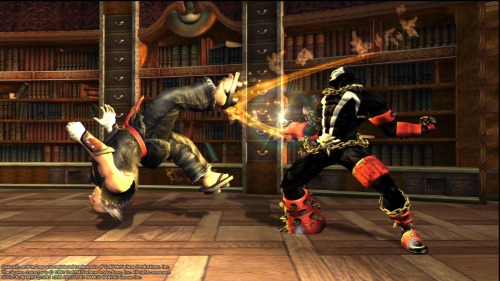 For both consoles the game can be purchased for $19.99.

The release is interesting timing, perhaps targeting gamers who are not upgrading to the next console generation in mid-November 2013 and who are nostalgic for the previous console generation. Many disabled gamers prefer to experience games in the fighting genre before purchasing them, because from the requirement for simultaneous button presses to the chaos of what is constantly occurring on screen, accessibility is largely unknown until played firsthand. Whether or not a free demo is offered is unknown.

The gameplay videos such as Mitsurugi versus Maxi, which is viewable here, does not reveal control requirements but does show that the ongoing explosions that have become the norm in the modern day fighting genre are not present in the HD release of this 2003 game. Additionally, at the end of the battles, each character states their “fighting phrase” verbally in English. The gameplay video is released with captions enabled and the speech is captioned, such as Mitsurugi proclaiming, “Don’t make me laugh!” at the end of a winning round, a feature which is largely not included in current generation fighting games. Each console generation has their pros and cons particularly regarding accessibility features.