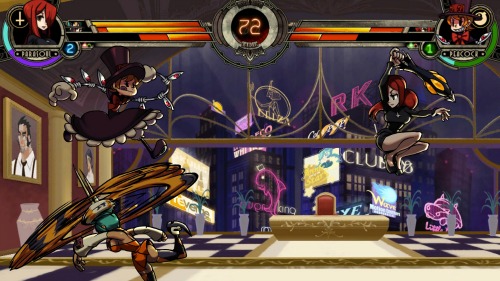 The patch began with a blind gamer informing Lab Zero Games that his text to speech program was unable to read the game’s font. As a result, all text only communications were inaccessible such as in-game text, navigating menus, character selection, and identifying opponents in the lobbies. Mike “Mike Z” Zaimont, the design director for Lab Zero Games, edited the game’s code to properly work with text to speech programs which logs the text onto clipboards and reads the text aloud.

Mr. Zaimont stated, “I’m pretty surprised other PC developers haven’t done this. Most text and informational things are already updated on screen so you don’t have to write special code to generate new text for most situations.”

The base game is overall accessible to blind players due to the left and right sound positioning that informs players where the characters are located onscreen.

Skullgirls Encore is available digitally on the PlayStation Network, Xbox Live Arcade, and PC via Steam.

The original story as reported by Shoryuken is available here.

The post-game release support by game developers is particularly beneficial to disabled gamers for requesting disability related game changes. Not all requests are able to be implemented after release but the ongoing conversations informs game developers about disability related needs in gaming for future game design.  DAGERS appreciates Lab Zero Games’ responsiveness to the needs of blind gamers.  The ensuing patch provided full use and enjoyment of Skullgirls Encore which is simply what we all are requesting as disabled gamers, regardless of our individual disabilities.