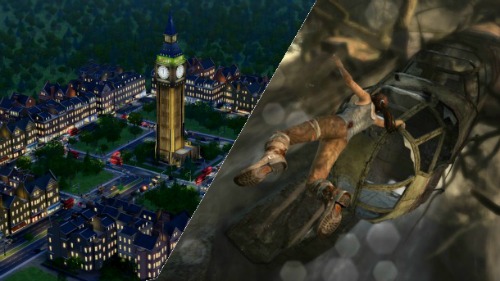 March has been a polarizing month in the world of games. On one end, you have a great game that has revitalized a series much loved by gamers and which lots of them will be able to play. On the other end, you have a game that, because of choices that its developer made, cuts out massive portions of the gaming community. There was a huge outcry over one of the games, and the other one met only with praise. One of these games is incredible, while lots of gamers wouldn’t know about the other since they can’t play it at all. These two games are Crystal Dynamics’ Tomb Raider and EA’s SimCity. But which is which?

SimCity should have been a great game. The opportunity to create and run such a complex city simulation has enticed gamers since the series’ beginning. And looking at the fundamentals of the gameplay (apart from the connectivity) SimCity is a remarkably well-done game. But it has been and continues to be plagued with problems. Because EA chose to make the game always online, only gamers with a steady internet connection and who never play on the go will be able to enjoy this game whenever they want—or at least that’s the theory. To make matters worse, EA failed to provide adequate server setup. In fact, it would be fair to say that at its launch, SimCity was one of the most inaccessible games in PC gaming history. But the question is, why? Did EA intentionally undermine SimCity because they didn’t want people to play it? Of course not. Call it poor planning, bad design choices, or just plain stupidity, the reality is, EA broke the game by accident. They didn’t intend to make it unplayable.

Thankfully, the flaws in SimCity do not diminish the overall experience. They just make the overall experience hard to access. EA is attempting to fix these problems and will most likely succeed in the near future. At that point, SimCity will be a great game that most gamers will be able to enjoy—especially considering how accessible it is for players with any kind of physical disability. Maxis has taken specific steps to make the game accessible for those with visual disabilities, not only including three dedicated colorblind modes, each of which compensates for one of the three most common colorblind conditions, but also allowing players with weak sight to zoom in on their cities in order to see the fine detail. Players with hearing disabilities can also enjoy this game because it doesn’t use sound to communicate anything important. But where the game really stands out is in its accessibility for people with fine motor disabilities (disabilities that affect the hands). In addition to being incredibly forgiving, the game can also be played with only one hand.

As a result, although there have been some serious connectivity issues up front, these are temporary. And when EA finally fixes them, SimCity will be a game that anybody can enjoy, regardless of physical ability.

By contrast, Tomb Raider appeared to be a great game from day one. It redefined a much loved franchise, with beautiful graphics, compelling story, and what is touted as some of the best gameplay for the current generation. Across the industry it’s getting high ratings. And yet, the game is probably unplayable for a larger group of gamers than the group that can’t play SimCity. Without eviscerating Crystal Dynamics for their design choices, the reality is, the game is completely inaccessible to most players with physical disabilities. In my experience, I spent more time handing the controller off to a non-disabled friend to get me past the quick time events and other barriers than I spent actually playing the game. Whether it is these QTEs or the game’s aiming mechanic, Tomb Raider is completely inaccessible if your hands don’t work well. Combine that with the fact that the game relies on fine visual detail, and the game falls even lower on the accessibility scale. The bottom line: Tomb Raider is also broken.

Like EA, Square Enix broke Tomb Raider by accident. But in this case, it was by neglecting to take the disabled gaming community into consideration when designing the game. Unfortunately, the flaws in Tomb Raider are not as easily fixed as those in SimCity. It would require a complete redesign of the title in order to make Tomb Raider accessible—a process which Crystal Dynamics has little time or desire to do, nor should they. They made the same kind of design choices as Maxis. The only difference is that most gamers are not aware of Tomb Raider’s accessibility issues, while SimCity’s connectivity issues have gotten front page attention.

So which game is good and which is unplayable? The answer is, both are. They are both great games that have been hobbled. One cuts out lots of PC gamers, the other cuts out lots of disabled gamers. And both were ruined by design choices that their developers made.

The difference is that since the release of SimCity, there has been a huge outcry over the fact that many gamers have limited or no access to the game. People are calling for EA’s blood over what is essentially a temporary issue. Yet gamers are furious over the delays it has caused. By contrast, Tomb Raider is permanently inaccessible to most gamers with disabilities. And the gaming community at large is silent. Where is the outcry over the fact that a vast number of gamers will never have access to Tomb Raider? Why does it seem like we only complain when games are momentarily unplayable? If we don’t like it when designers make choices that exclude gamers temporarily, shouldn’t we voice our concerns even more loudly when game developers make choices that exclude players permanently?