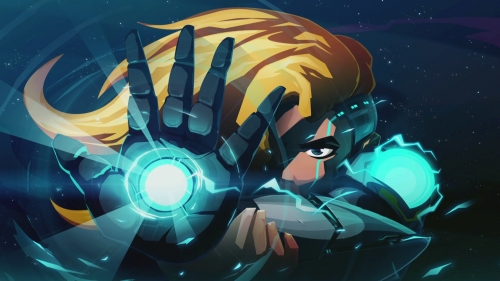 August was a fairly weak month for free games, but September’s a strong one with some major offerings on PlayStation and Xbox consoles. Today, we’ll taking a look at Velocity 2X – a new 2D side-scrolling action/vertical shooting game that is free for anyone with a PlayStation Plus subscription.

The original Velocity was a top-down vertical shooter, and this sequel keeps that setup, but adds a lot of gameplay versaility thanks to the new side-scrolling action. As the lovely Kai, you’ll pilot a ship for vertical shooting and gather crystals to power it in side-scrolling sections. The plot itself is very simple, with Kai waking up and finding that she’s been augmented by a species called the Vokh, and she’s just lost. Luckily, she soons finds an ally whose race has been enslaved by the Vokh, and he wants to help her escape the Vokh and take them down.

Doing so requires a skillset in both side-scrolling platforming, action-platforming, and vertical shooting. Despite that, this isn’t a difficult game. Challenging? Sure – but it’s a blast. The levels are fairly small, death is a slap on the wrist, and you’ve got a lot of tools at your disposal to keep you alive. For the top-down sections, you start with just an X button blaster, but eventually get some right stick-controlled bombs and can drop long-range teleporting pods to help speed up longer levels. On-foot, you begin with a basic right stick blaster that evokes Contra with its fast blasts, but this controls a little better than an older Control game since the right stick allows for more precise movements. In either the on-foot or ship sections, you can use the d-pad or left stick to move around, but I found the d-pad works best for the platforming sections, while the stick is the way to go for the vertical shooting portions. The platforming sections are full of mini-puzzles where you need to get crystals, slide under things, blow up stuff, and hit things in a certain clearly-numbered order to progress.

Doing so will allow you to get to the end of that level and depending on the stage, either clear that level, or move you onto the next portion of the top-down shooting portions. Regular enemies litter your path, but the big key is the pick up the trapped scientists inside pods that you blast through. While this may sound a bit like Resogun, the execution is different as you have plenty of time to help them. If you’d like to speed the game’s pace up, either R1 or R2 will boost you through either the on-foot or top-down shooter sections. I recommend taking it slow at first, then speeding through because this is a really low-risk game and you can afford some deaths just for the thrill of zooming through at breakneck speed.

The controls in every section are razor-sharp, and while the plot itself isn’t very exciting, the game as a whole is. It’s also fairly disability-friendly since the controls are so versatile and responsive. Using the right stick might be easier for some with motor issues than just the buttons, and this game being so forgiving means you can beat it without much frustration. The on-screen text is very large, as are the characters, and the sharp character designs stand out against all backdrops and prevent either your character or the ships from blending into the background. When it comes to the audio, you’re honestly not missing out on much by muting it, so if you have hearing problems, don’t worry about it. The storyline is told through vibrant still-frame cutscenes with gigantic text, making it friendly to those with either visual or auditory disabilities. The music is very sci-fi-ish, but not very memorable.

Velocity 2X is one of the finest platformers on the PlayStation 4. The system has experienced some growing pains with this genre, as only a couple of titles are even available in it. When it comes to action-platformers, this is more fun than the Strider reboot, and is only topped by Rayman Legends in terms of delivering a colorful experience to the platform. It’s a must-play game for platforming fans seaking something that will challenge you, but not overwhelm you. It’s also a perfect gateway game for overhead shooters as you’re eased into the mechanics of the genre, so if you don’t normally play those games, give this a shot and see if a slower-paced one is for you. Velocity 2X is free for all PlayStation Plus users and is playable on both the PlayStation 4 and the PlayStation Vita as a cross-buy title.