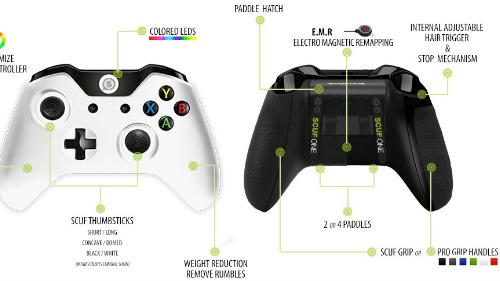 Scuf Gaming was founded in 2010 and is known for its “paddles,” which are buttons on the back of the controller that are mapped to replace the default buttons on the controller. The paddles allow for use of the thumbsticks without removing the thumbs to hit other buttons. Players have clamored for next generation Scuf controllers since the new consoles released last fall. Scuf One is the company’s first next generation controller.

The Scuf One’s base price is $109.95, in comparison a new Xbox One default controller costs $59.99 and the base cost of a Scuf Hybrid for the Xbox 360 is $87.95. A variety of modifications from the cosmetic to button remapping options to grip enhancements are available for additional costs. The base Scuf One controller includes two paddles with the option for four total for an extra $15.95. The A and B face buttons are automatically remapped to the first two paddles with the X and Y buttons remapped to the two additional paddles. However, a variety of controller buttons – including face buttons, bumpers, D-pad, and press thumbsticks down – may be remapped to any paddle at a higher cost.

Other features include removing the rumble packs for a lighter controller as well as player removable adjustable trigger and stop mechanism that provides a faster response for trigger pulls. Certain features, notably trigger stops, are not compatible with some titles but the removability of the trigger and stop mechanisms allow for controller adjustments for individual games.

The newest feature is not available until March 2014 which is Electro Magnetic Remapping. EMR provides for on the fly paddle remapping where the player can remap the paddle buttons at will. The price for including EMR is unknown.

A range of thumbstick options are also available for adjusting the height and whether the thumbstick itself is domed or concave.

Note that the Scuf One does not remap the triggers or the use of the thumbsticks for camera and player movement but does allow for remapping the need to press the thumbsticks down. Disabled gamers seek modded controllers in order to play and enjoy games that are inherently inaccessible due to no or limited controller remapping settings within the game itself. For targeting disabled gamers, Scuf Gaming may consider adding features such as allowing controllers with two paddles to place both paddles on the same left or right side.