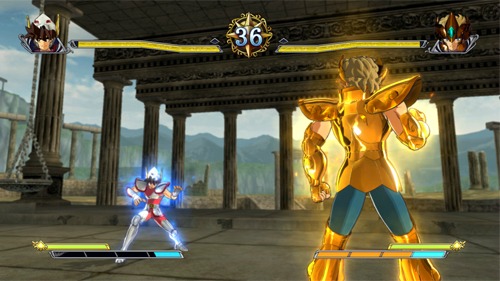 Saint Seiya: Brave Soldiers releases on November 26, 2013 in North America on Playstation 3’s Playstation Network and as a retail product in Mexico, Latin America, and Brazil. Announced for the game are three different modes: Galaxy War, Survival, and Collection mode.

Galaxy War mode is inspired by the Galactic Tournament that occurs early in the Saint Seiya manga. The mode is a single-elimination tournament that culminates in a king of the tournament winner. The mode includes all of the Saints and characters from Saint Seiya. Additionally, players choose their opponents and preferred difficulty levels. Survival mode is a series of not only fights but also challenges that allows the player to regenerate their HP bar for continued survival. Collection mode houses unlocked items.

Dragon Ball Z: Battle of Z releases in early 2014 on the Xbox 360, the Playstation 3, and digitally on the Playstation Vita. Additional screenshots such as the image above are now released and the game’s features include battle in teams of four, massively sized enemies, and online battles with up to eight players.

New screenshots and trailers do not reveal gameplay accessibility for fine motor control disabilities. For visual disabilities, the cell shaded based graphics in both games provide clarity between characters and environments even when multiple characters are simultaneously on screen battling. Special effects such as fire and shadow blur the image clarity at times.

The trailers for both games include subtitled gameplay dialogue and the advertised features are displayed in text such as level and feature names. Certainly, this is due to the fact that a Japanese to English translation is easiest done by text thus the subtitles are focused on a language translation not audio cues. Watching a game’s promotional videos in its entirety with clear text is a rare treat.

Note that the in-game subtitles are clearly readable even amidst frantic gameplay. This is accomplished by not only outlining the white text but including a slight, opaque shadow that distinctly defines the letters.