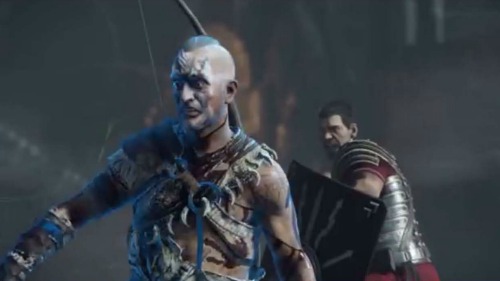 Recently, I had the opportunity to play 45 minutes of Ryse: Son Of Rome.  Ryse: Son Of Rome is an Xbox One launch title that was previously announced as an Xbox 360 Kinect title.  In the transition, the first person Kinect gameplay became a third person action game.

After the game began, a minute passed before I realized that the graphics were in-game and not only for cut scenes.  Crytek’s expert graphic capabilities remains undisputed in the next generation.

The initial gameplay includes a surprisingly deep strategy.  The next generation graphics render character models beautifully.  Combat is not flashes of light upon striking but character models realistically stumbling back or impaled.

While combat options are basic – push, attack, block, and evade – strategy is required when surrounded by barbarians.  The player must address the entire horde when circled by barbarians or face blows from all sides.  By thinking past the first move and avoiding button mashing, the player can break the barbarian formation by pushing away one barbarian while blocking another then attacking a third.  The realistic graphics are so immersive that it took the contrived inclusion of a dodge roll maneauver, a video game staple, to pull me out of the convincing illusion of Roman era combat.  Heavy enemies have an unblockable attack that requires evasive action.  My fully armored Roman soldier looked silly effortlessly dodging away with a roll while wearing his armor, sword, shield, and plumed helmet.

In combat, a skull icon appears over the enemy’s head upon low health and enables a slow-motion execution by pulling the right trigger.  During the slow-motion kill the enemy flashes different colors that correspond to the controller’s face buttons such as X for blue and Y for yellow.  If the correct buttons are pressed, the player is awarded more focus points for purchasing upgrades.  If not, the enemy is killed regardless, but fewer focus points are awarded.

Unrequired button combinations for successful executions is an accessible gameplay feature for disabled gamers with fine motor disabilities who experience difficulty pressing the correct buttons within the time limit.  However, the feature is one of the most common complaints about the game, due to removing the need for player input.  Possible solutions are that higher difficulty levels require a successful quick time event for the enemy’s death and subsequent focus points or a mode turning required quick time events off.

Colorblind gamers, take note of the required color prompts.  The color coded prompting singly relies on color differentiation.  This feature is used in executions, heavy enemies signaling an unblockable attack, and interactive environment objects such as spears for combat and collectibles.  The prompt is a colored flash that is a translucent skin on the character or environmental object and is difficult to see with colorblindness.  The picture used above is an example of an enemy flashing blue in an execution as a prompt to push X for gaining additional focus points.  In a sequence during my gameplay, I ran aimlessly throughout scaffolding unsure of how to proceed.  Finally, a friend watching pointed out a rope that was flashing a dull blue to signal cutting the rope with my sword in order to trigger an opening.

Ryse: Son Of Rome includes subtitles.  Achievements now appear instantaneously and appear at the bottom center of the screen, whereas on the Xbox 360, an achievement pops up a few seconds after the reached milestone in the screen’s upper right hand corner.  An unexpected byproduct is that the achievement notification now blocks subtitles, and Ryse: Son Of Rome is a cut scene heavy game.  This requires either a change by Microsoft to move the achievement notification location or for game developers to account for the location of the console notifications in relationship with their game’s onscreen content.

Ryse: Son Of Rome is a beautiful game that opens up the possibilities for upcoming Xbox One games.  The realistic graphics highlight new difficulty with video game logic, breaking immersion in Roman warfare with instances such as an incredibly quick firing ballista.  The next generation and its games are here. Simply temper expectations to accommodate its growing pains, and do not assume the presence of accessibility features that you require as a disabled gamer.