Running After The Monolisa Mafia Girls 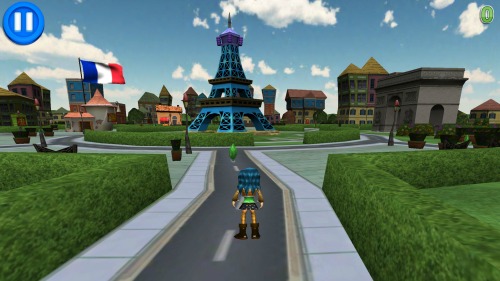 EnsenaSoft released Where In The World Is Monolisa? on iOS exclusively for iPads. Previously, the game was only available on Windows 8 platforms.

On iOS the game is a free download with no evident micro-transactions.

A narrative involving a criminal mastermind, the Monolisa Mafia Girls, stealing culturally significant items from countries is the basis of globetrotting based gameplay for retrieving the stolen goods. In each play through, a brief cut scene introduces what was stolen (the Suez Canal from Egypt). The player is dropped onto the harmed country’s map (Egypt) that features the country’s famous landmarks (the Great Sphinx of Giza) and the monuments includes information pop ups (the Sphinx watches over The Pyramid of Khafre).

Running across the map picks up scattered gems that are needed for flying to the next country in pursuit of the Monolisa Mafia Girls. The player navigates third person running with one finger on the touchscreen steering the character. Along the run scattered NPCs offer clues about the next country on the jet setting pursuit such as, “The birthplace of Salma Hayek” (Mexico). Once on the plane, a handful of possible countries are provided as options for the next locale. The correct answer continues the search whereas the wrong answer results in the NPCs talking nonsense and a trip backwards for trying again.

Essentially all of the maps are the same layout with different landmarks representing the destination country. The focus is less on catching the thieves and more on learning about each country during the journey.

The game controls via touchscreen with one finger steering the detective. There are no alternative control options and the steering is sensitive resulting in unexpected detours into hedges and other environmental objects which provides a barrier for those with fine motor control disabilities. Additionally, prolonged gameplay with a single finger controlling continuous running is tiring but gamers play at their own pace without the added stress of a time restriction. The graphics do not provide clear contrast coupled with difficulty manipulating the camera results in trouble with gameplay goals such as discerning gem locations for visual disabilities but the landmarks are large and distinct locations.

As a deaf gamer, I play mobile app games that are meant for 10-15 minute play sessions on mute because setting up my Bluetooth streaming hearing aid peripheral (Phonak’s ComPilot) for sound in a quick gaming session is more hassle than fun.  While character conversations are provided in clearly readable text bubbles. At the game’s beginning I was unsure if I missed audio instructions because I had no idea how to proceed. I determined the gameplay and game goals through trial and error. Additionally, the game advertises “music related to each destination” that I cannot comment on but the lack of music did not impact my gameplay.