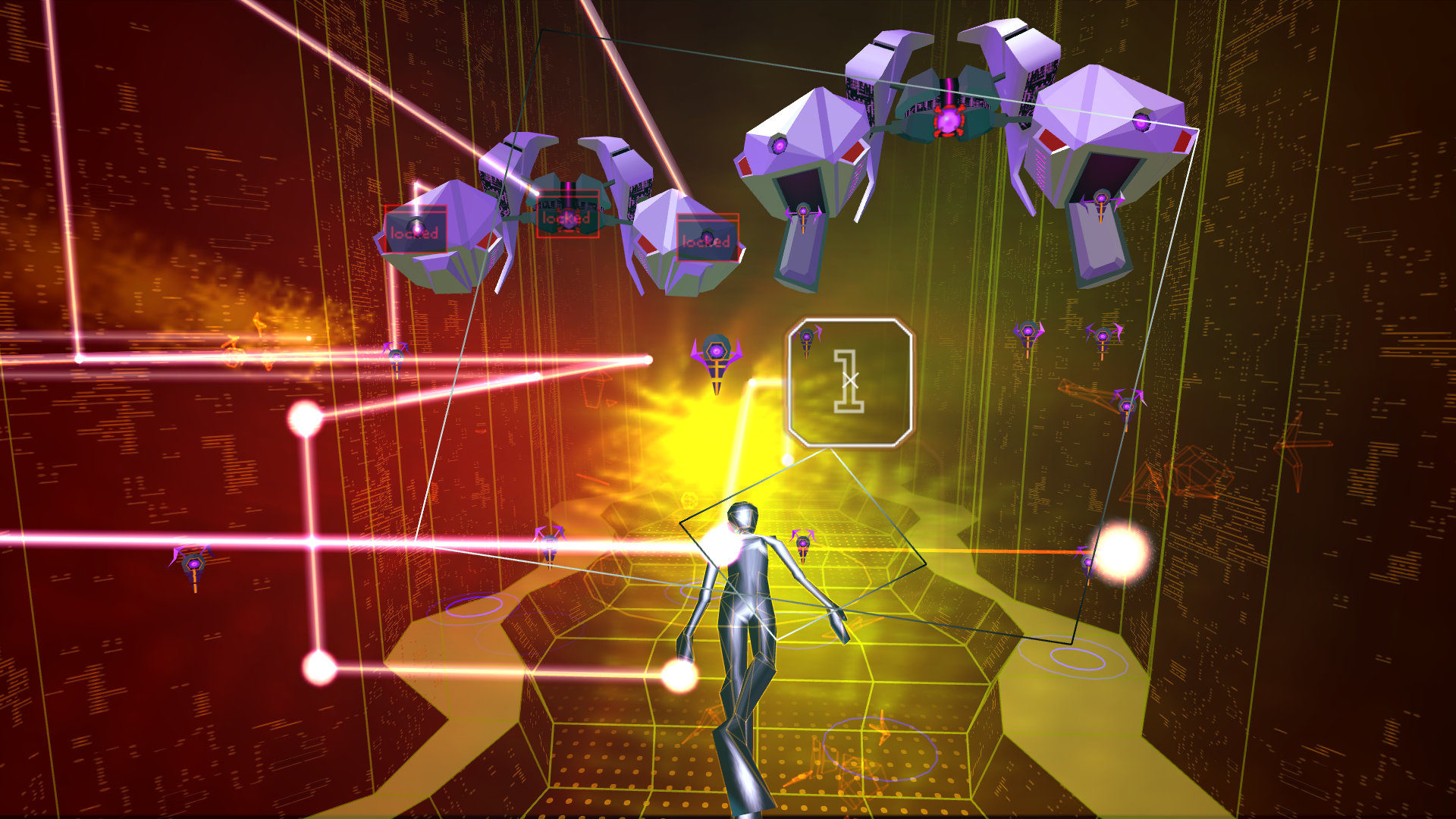 Rez Infinite is an on-rails shooter as well as a music and rhythm-based game. The game has an experimental design as the story is told mostly through psychedelic imagery and electronic music. The gameplay, music, and vibration all work in sync with one another. Rez Infinite was even designed to invoke feelings of synesthesia, which is a neurological condition that allows for the blending of the senses. This game on the PS4 is a remastered version of an older title simply called “Rez” that came out 15 years ago on the PS2 and Dreamcast. Rez Infinite has updated visuals, new levels, and VR support. However, the VR mode is an optional feature. This game speaks to me on many different levels. At times it can be fun, disorienting, and extremely energetic. You are in for a wild ride for sure.

I wasn’t sure what to expect when playing the newly remastered Rez Infinite because companies tend to modernize the controls for new audiences. Thankfully the controls are virtually identical to the original game. You simply aim with the left control stick and press the fire button. Also, you can hold down the fire button to lock-on to up to eight different enemies at once. There’s only one other button you’re required to press occasionally and that is the Overdrive button. Overdrive is a bonus power up that kills all enemies onscreen for a limited time. This is an optional feature however, and just serves to help you in a jam. Interestingly enough on top of the very simple controls in Rez Infinite, they also offer the option to change the controls. Immediately I noticed a plethora of options you can change in the game menu. If you like, you can change the fire button and the overdrive button to something else. Vibration is a key part of interacting with levels in the game, but if you find it too distracting you can turn this feature off completely in the game menu. Now Rez Infinite does sometimes require quick movements during gameplay, but if it gets too difficult for some the game offers something called Traveling mode. Traveling mode makes the player completely invincible throughout the level. There’s no consequence for taking damage and you are still able to utilize power ups. I most certainly recommend this mode if you’re looking to play casually. However, I should note that Rez Infinite does not offer Traveling mode for the final level in the game. Lastly I want to talk about the new area added to Rez Infinite which is exclusive to this remastered version. The completely new level is called Area X. This area updates the controls slightly to give freedom to change your perspective while aiming and adds the Boost function. It plays basically the same as the other levels, but it can be jarring if you’re used to the limited view of the on-rails style of the other levels in the game. Disabled gamers with fine motor skill impairments should have no trouble at all playing Rez Infinite. The game offers customizable controls and several different play styles.

The visuals in Rez Infinite can change quickly and that includes having bright flashes of light appear throughout a level. I’m including a seizure warning for those sensitive to things of that nature. The game’s enemies usually stand out nicely on the dark background, but there is a brightness scale you can change if need be. Colorblind players will most likely have trouble playing some parts of Rez Infinite. Shooting enemies and defeating bosses shouldn’t pose much difficulty, but where they will have the biggest obstacle is picking up bonus power up items. While playing Rez Infinite your character’s avatar will go through stages of evolution as you progress. You begin as a pulsating orb and as you level up you slowly change to a more humanoid figure. You can achieve about five different stages of evolution. Evolving requires power up items, but they are two different power ups available in the game. One is for the Overdrive function and the other is the Evolution function. These two items are identical in shape, so the only way to tell them apart is there color. The Overdrive item is blue and the Evolution item is red. Rez Infinite can have a very cluttered and chaotic screen so finding these items can already be challenging without a colorblind hurdle. So colorblind players will have no way of differentiating between the two items. If that concerns you, I would recommend grabbing any item you can find regardless of the color it appears to be or just try playing on the Traveling mode where the items won’t matter. Either way the bonus power ups aren’t technically required to beat the game it just makes it slightly easier.

There are good things and bad things in Rez Infinite for gamers with hearing impairments. Unlike most games, Rez Infinite does not have any spoken dialogue so subtitles are not needed. The game is set to stimulating techno music that matches the beat and timing of your combat. So deaf players can enjoy the story without any problems. The biggest issue is that so much of Rez Infinite revolves around music so deaf players won’t be able to experience everything in the game the way it’s meant to be played. The vibration can help compensate, but it isn’t always reliable. This is the nature of rhythm-based games I’m afraid. Still, Rez Infinite is playable for deaf players. Some aspects of the game may end up being lost on them.

Rez Infinite will take you on an intense mood-altering journey. I was extremely happy to hear Sony decided on rereleasing this hidden gem. The modern club music mixed with its old-school shoot’em up gameplay gives it a nice retro aesthetic. The amount of control options available in Rez Infinite is refreshing, so disabled gamers with fine motor skill impairments can play this with ease. It’s unfortunate for deaf players that the game relies so much on music, but there is still quite a lot they can get from it.