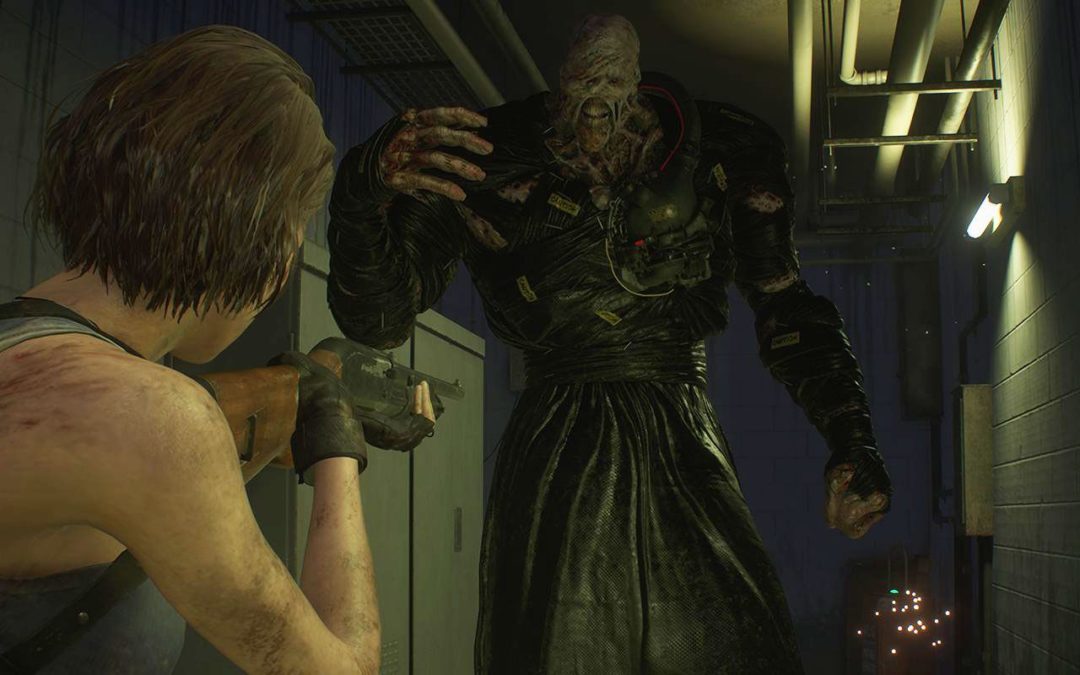 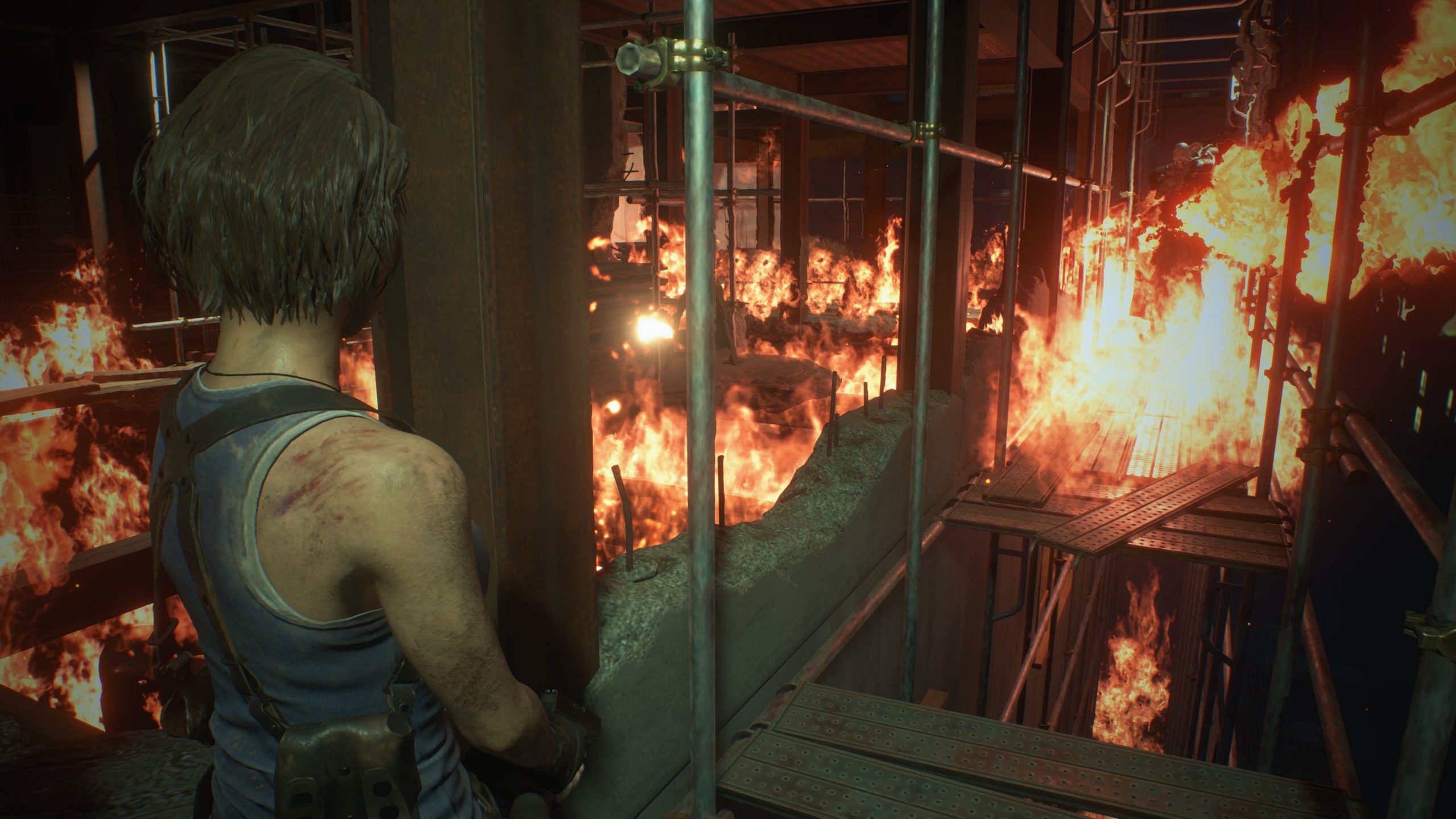 Escaping a zombie-invested city isn’t easy especially when a giant hulking monster is out to destroy you and your friends! Resident Evil 3 remake is a modern retelling of the survival horror game Resident Evil 3: Nemesis developed by Capcom and released on the PlayStation in 1999. The remake was released on modern consoles and PC this year and has many of the same characters, but it has a very different combat style, more advanced controls, and even story beats have changed. The remake is much more action oriented than previous games in the franchise, but Capcom made sure to include great accessibility features for disabled gamers.

For transparency’s sake, I played the PC version of Resident Evil 3 remake. At its core, this is an atmospheric survival horror game, but both the original and RE3 remake have much more involved combat than other games in the series. It’s for this reason I chose to play the PC version, because PC games tend to have more customizable options for disabled gamers. Accompanying the added combat is a designated dodge button, enemies that regenerate, and a greater need for quick aiming movements. There are a few steps backwards when it comes to accessibility in the remake, but there’s also a lot of improvement.

The original’s controls required pressing many buttons on the controller at any given time. The directional pad and left control stick could be used interchangeably, but there were designated buttons to run, dodge, attack, and access the map. The trigger buttons were used for aiming and accessing the map. Certain inputs like dodge and aim even needed to be held down while moving the control stick to be effective. RE3 remake also requires many button inputs during combat, but it has a leg up on the original by offering full controller customization. Additionally, this time around you can choose between holds and toggles for running and action prompts. When fighting zombies in RE3 remake you are prompted to press or hold a button when grabbed. Unfortunately, you will always be bitten even if you input successfully in time. I believe the prompt is there to lessen health loss, but if you’re grabbed, you still get hurt no matter what. Compare this to the original where tapping a button repeatedly knocks zombies away when they grab you. It takes more physical effort, but you do have a fighting chance. Aim assist is available in both the original and in RE3 remake. Aim assist is essential for anyone with fine-motor impairments like myself, and without it I wouldn’t be able to fight any enemies. It’s worth noting that in the original game you had to manually turn on aim assist in the options menu, while in RE3 remake it is on automatically as long as you’re playing on assisted mode.

Speaking of difficulty modes, RE3 remake has three to choose from in the options menu: assisted, standard, and hardcore. In addition to aim assist being on by default in assisted mode, it has regenerating health, enemies are weaker, ammo is plentiful, and you start the game with an assault rifle. In the original, you have the option to try easy mode or hard mode. Easy mode starts you off with a machine gun that has infinite ammo. Also, the first save room you encounter has a shotgun, a magnum, and a handgun with plenty of ammo for all three weapons. Still, even with these perks the original was known for having randomly generated enemies and puzzles. There were also numerous timed puzzles that could be difficult for gamers with fine-motor impairments. Although there are many enemies in RE3 remake, they’re are on a set spawning schedule, and none are randomized. This brings me to Nemesis, a giant bipedal creature that chases you endlessly throughout the game. In the original, Nemesis was a very dangerous enemy that could find you in random places, and if you didn’t have the right weapon, he could take you out very easily. In RE3 remake, he is still dangerous despite the exclusion of the random encounters of the original. Just like all the other enemies, he operates on a programmed schedule, and with a well-timed grenade or rocket launcher blast he is easily subdued.

As far as options for gamers with visual impairments are concerned, RE3 remake has many. There’s a brightness slider that’s very helpful for dark parts of the game, especially the city portion. If the camera’s field of view is too close to the main character, you can pan it back if you’d like. If the screen is too cluttered, you can turn off the HUD, and tutorial pop-ups can be turned off in the options menu. For colorblind players, there’s a new option to change the color of the aiming reticle. For gamers with hearing impairments, you can customize the individual sound levels in RE3 remake, including sound effects, dialogue, and music. You can change the voice-over language, and there are subtitles available. Although the original let you change the individual volume levels, there were no subtitles whatsoever. Deaf players were out of luck if they wanted to experience the story in the original game. Thankfully, RE3 remake has easily readable subtitles that are very consistent even during combat.

There is a lot of zombie action in both the original and RE3 remake. Still, the Remake improved on many aspects of the original game, especially when it comes to accessibility. Gamers with fine-motor impairments have an assisted mode with aim assist and easier enemies. Deaf players actually have reliable subtitles unlike in the original. Although relatively limited, I’m always impressed with Capcom’s colorblind options, in this case the ability to change the aiming reticle’s color. I’ve seen this option in many of their previous games, so it’s great to see that it’s a mainstay. RE3 remake has some tough moments, but there are enough accessibility options for disabled gamers to easily access this modern take on a classic horror game.