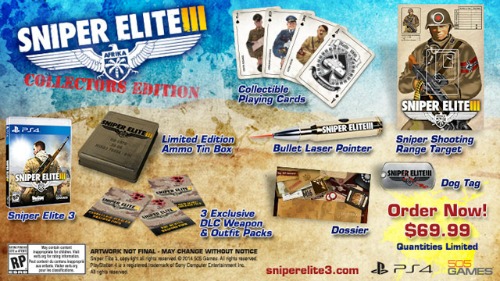 Sniper Elite 3 by Rebellion releases on July 1, 2014 on the Xbox 360, Xbox One, Playstation 3, and Playstation 4 in North America.  The PC edition and console releases in the United Kingdom and Europe will launch on June 27, 2014.  The base game is priced at $49.99 with various bonuses for preorders.

Preordering Sniper Elite 3 for PC nets a 20% discount for a $39.99 price.  Additionally, preorders receive the bonus DLC mission, Hunt the Grey Wolf, that tasks the player with hunting Hitler and his double while reasoning which of the two is the imposter.  The randomized target identities, journals, and locations are designed for multiple playthroughs.

For the Xbox One and Playstation 4 a Collector’s Edition of the game is available.  For $69.99 the edition packages a limited edition ammo tin box, collectible playing cards, a bullet shaped torch pen, a dossier, dog tags, a sniper shooting range target, and three exclusive DLC weapon and outfit packs along with the game.

Sniper Elite 3 is set in the North Africa conflict of World War 2 where the Germans have the upper hand against the Allies with more soldiers and weapons.  The player is on a mission to prevent the Germans from successfully developing a super weapon that has the potential to decide the entire war.

The previous entry in the series is 2012’s Sniper Elite V2.  The franchise’s gameplay is slow moving sniping with stealth kills, setting mine traps, and throwing rocks for a distraction.  Sniper Elite V2 does require two handed gaming with minimal customizable controls.  The subtitles options are unique with both Subtitles and Enemy Subtitles available separately.  The Enemy Subtitles shows the enemies’ speech thus the dialogue and the knowledge that enemies are nearby are available to deaf and hard of hearing gamers.  A demo for Sniper Elite V2 is available on Xbox 360 and Playstation 3 which allows disabled gamers firsthand experience with the game prior to purchase.