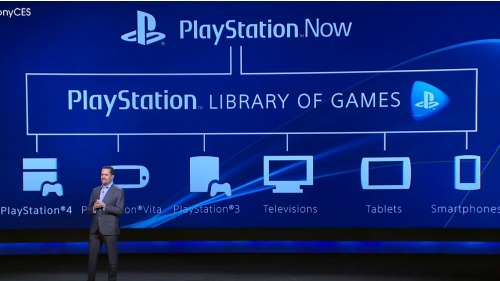 On January 7, 2014, at the Consumer Electronics Show 2014 in Las Vegas, Sony revealed PlayStation Now (PS Now) which is a new streaming game service expected to be available by summer 2014 in the United States.

PS Now uses Gaikai’s cloud-based technology for streaming video games on multiple devices, allowing for access to a save file on a variety of devices through logging onto the Sony Entertainment Network on compatible devices and game streaming on non-PlayStation consoles. In the battle for the living room, Sony is bypassing consoles, including its own, for providing the digital platform to access a gaming library that cannot currently be played on one device. Initially, PlayStation 3 games will be available.

Sony’s rebrand of Gaikai’s game streaming as the solution to the lack of backwards compatibility for the PlayStation 4 expands the service to non-PlayStation devices. While the consoles compete for the living room, Sony is bypassing consoles by streaming directly from the television and other internet-connected devices beyond PlayStation consoles.  A multitude of entertainment apps are already available on smart-televisions, smartphones, and tablets.  PS Now provides for games the types of services previously only seen with music and movies.

PS Now’s beta commences in the United States at the end of January 2014. Specific prices are not yet released, but Sony touts both individual game rentals and a subscription service that opens up a variety of titles.

PS Now is reminiscent of Valve’s recently announced SteamOS that bypasses traditional gaming consoles for providing games across more devices. On the other hand, Microsoft is noticeably working towards integrating the physical Xbox One console into the television by moving the console towards an all-in-one multimedia box, starting with watching cable television through the console.

For disabled gamers, more devices for gameplay and more overall gaming options for playing provides variety for choosing a gaming set up that meets disability related needs. Unanswered questions remain about pricing and the real world effectiveness of streaming on home internet connections. The overall services remain theoretical, but the goal of providing PlayStation 4 backwards compatibility to PlayStation 3 games by summer 2014 with game streaming gives disabled gamers a larger game library of accessible games on one machine.