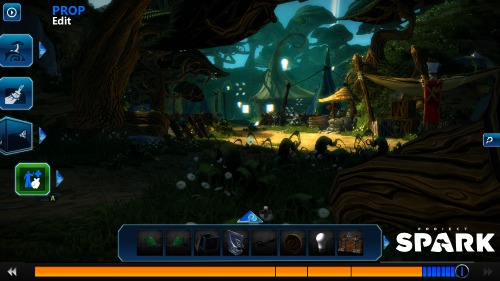 The Project Spark Start Pack, the game’s retail edition for the Xbox One, releases on October 7, 2014 in the Americas.

Project Spark brings game creation to gamers with tools to build and play in digital worlds. October 9 and 10 will bring the Project Spark Start Packto Asia-Pacific countries and Europe respectively.

For $39.99 the retail edition includes Galaxies: First Contact which is a sci-fi pack, Sir Haakon “Hawk” the Knight who is a warrior champion, Champions Quest: Void Storm which is the first episode of a campaign adventure and more unannounced content. Additionally, the on disc content will be available digitally at launch for both the Xbox One and Windows 8.1.

Project Spark’s beta began in December 2013 and the release of the Project Spark Start Pack is the transition from beta to full release. Players who’ve participated in the beta will carry over all credits, creations and levels into the official release.

Project Spark is essentially free to play as the game is a free download onto the Xbox One and PC where players can interact with the initial content. Premium content is available either with earned in-gamed credits or purchased with real world money.

Project Spark’s beta remains open on both the Xbox One and PC but it’s current free to play pricing model will allow disabled gamers free access into the base game for firsthand experience prior to spending actual money on additional content. For disabled gamers with fine motor disabilities the world building game allows players to choose their controller interface from between a keyboard and mouse, controller, or touchscreen. For deaf and hard of hearing gamers there is currently no reliance on sound. For low vision the icons are clear with exaggerated art styles but differentiating between the world sculpting options such as topography choices requires differentiating between small details between the icons.