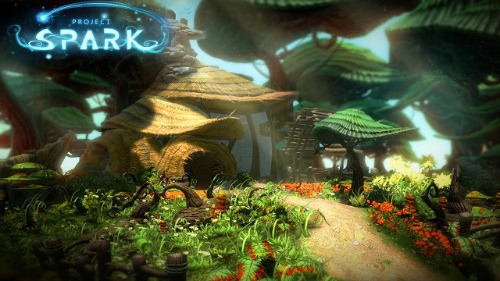 Microsoft and Team Dakota have announced the commencement of the closed beta program for Project Spark on Windows 8.1. The Xbox One beta will begin early in 2014, with the game launch to follow in 2014.

Project Spark is an open sandbox game that is free-to-play and gives the player full customization over the game world.  Players create their own games, movies, and stories that can be shared while also experiencing the content made by other players.  The Crossroads mode provides a single player experience that simplifies the toolset by tasking the player with making a series of game design decisions that determines the final game such as terrain types and heros’ homes.  The full editor gives the player customization over the entire game world with paints and biomes for textures and environmental themes.  The game has a “brain” which simplifies game coding and allows the player to assign tasks and functions to in-game items and characters.  Both player assigned brains and preset brains are fully customizable.

Project Spark will launch in 2014 on Xbox One, Xbox 360, and PC.  Exclusive features are available on the Xbox One including a “mocap studio” mode that utilizes the Kinect.  Access into Project Spark as a free-to-play game does not require an Xbox Live Gold membership.

Betas provide the opportunity for gamers and developers to collaborate before the game is finalized.  Thus, betas allow disabled gamers a chance to inform developers of gameplay that prevents full enjoyment based on a disability.  Development changes are more easily implemented before the game is completed.

Additionally, Project Spark is a flagship Microsoft exclusive, particularly for its capabilities on the Xbox One.  The closed beta gives disabled gamers access without upgrading to an Xbox One with a PC beta that does not require microtransactions to unlock available features as disabled gamers assess their new console generation plans.