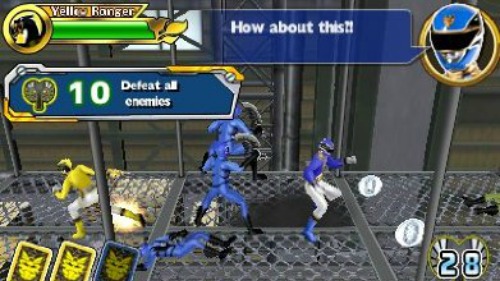 In the Power Rangers franchise each team retains color coded uniforms, mostly following the original pink, yellow, black, red and blue color scheme, with each member assigned a color. However each iteration has distinct markings. The Mighty Morphin Power Rangers will induce nostalgia as many children of the nineties recall the diamond patterned uniforms of Kimberly, Trini, Zack, Jason, and Billy.

The gameplay includes real time combat as the player controls any one member of Power Rangers MEGAFORCE and a power up system based on trading cards. Of course the game includes summoning the Power Rangers’ individual Zords for the inevitable combination into the Megazord for a Zord versus Monster showdown.

The new character skins do not add or subtract from the game’s accessibility. Regarding the game itself, information known includes that for visual disabilities the game is playable in either 2D or 3D. Screenshots currently available show readable text bubbles for both dialogue and game goals such as “defeat all enemies.” The specifics of the actual gameplay’s impact on fine motor disabilities are unknown.