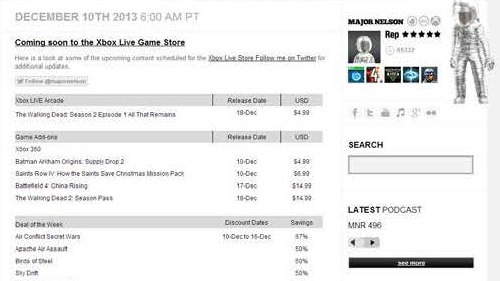 Larry Hryb, Xbox spokesperson, tweeted this morning on December 10, 2013 from his twitter handle @majornelson a link to upcoming content and deals for download for the Xbox 360 that you can view here.

The list includes The Walking Dead: Season 2, Episode 1: All That Remains for $4.99 with a release date of December 18, 2013. Additionally, the list states that on the same day players can buy The Walking Dead 2: Season Pass for $14.99. Episodes 2-5 of the previous season of Telltale Game’s The Walking Deadwill be available for 66% off from December 17 to December 23, 2013.

Telltale Games’ tends to not officially announce the console releases until days before the game will be available. Telltale Games’ recent releases – The Walking Dead Season 1 and The Wolf Among Us, Episode 1 – have included a free demo of the first episode that allows disabled gamers to experience the game firsthand prior to a purchase commitment. More notice of the game’s release gives disabled gamers more time to financially plan for a possible purchase, especially for disabled gamers interested in a potential sale for the Season Pass, amidst a holiday season of ongoing sales that are balanced against disability related purchases.