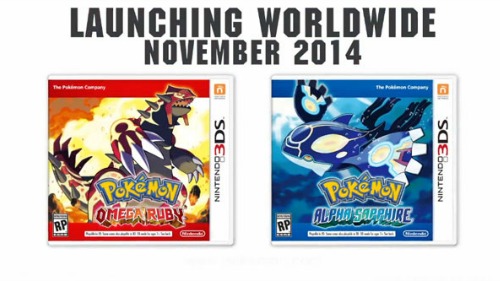 In describing the games, Nintendo stated that “The new titles promise to take players through a dramatic story within a spectacular new world.” Details remain sparse and whether this statement alludes to a remake of the originals, new content or a new location is unknown.

In a recent release of Nintendo’s financials, the Pokémon franchise is continually featured multiple times in the top ten sellers of the handhelds. 2013’s Pokémon X and Pokémon Y sold 12.26 million units and is the top selling game for the Nintendo 3DS. November 2014 will show whether that title will soon be supplanted by the latest in the series.

See the press release here and for more information as it’s released about the upcoming games check in at the Pokémon website here.

The announcement of 2014 Pokémon games are a benefit to disabled gamers. DAGERS has often featured the Pokémon series as a barrier free gaming experience for an AAA franchise. See Game Freak’s nomination for DAGERS’ developer of the year here and DAGERS disability game review for Pokémon X and Pokémon Y here.