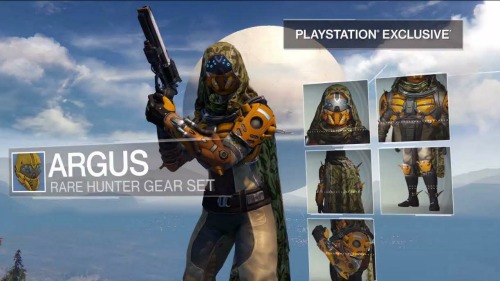 The Exodus Blue PvP Crucible map is a derelict Exodus Blue colony ship from the Golden Age that features five gameplay modes, Skirmish, Control, Salvage, Clash, and Rumble. The map focuses on on-foot gameplay and supports teams of three or six. A hidden broken pipe allows players to run from one end of the map to the other.

Additionally, the Playstation consoles will receive exclusive armor for the Hunter, Titan, and Warlock Guardian classes as well as two unique weapons. The Monte Carlo is an exotic auto rifle that maintains accuracy when fired from the hip and reduces the melee cool down. While Hawkmoon is an exotic hand cannon in which random bullets dole bonus damage. Remember that one weapon and one heavy weapon can be equipped at one time.
See the original post on the Playstation Blog here.

Destiny is releasing on the Playsation 4, Playstation 3, Xbox One, and Xbox 360.

Timed exclusives are popular across all video game platforms recently and the Playstation Destiny exclusives are expected to become widely available sometime in 2015. More gear and weapon options are a benefit for disabled gamers by adding to the gameplay options. Keep an eye in this space for DAGERS’ look at the disability accessibility in Destiny’s beta.