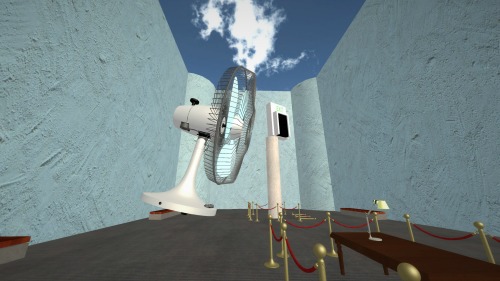 Pillow Castle, a five person game developer based in Pittsburgh, PA, that was borne of the Carnegie Mellon University Entertainment Technology Center, has released a tech video of a game concept.

The tech demo has a decidedly Portal atmosphere with its locale of the Museum of Simulation Technology. The gameplay is a play on perspectives (which is the basis of puzzle solving in order to unlock each room’s exit), and the game includes portals. The concept is based on “forced perspective,” an optical illusion that is most commonly seen as a camera trick. The player manipulates an object’s size relative to another object by the player moving further or closer to the object. Thus, the Statue of Liberty shrinks to the size of a doorway and again to sit comfortably on a table.

Manipulating objects’ sizes is the basis of several creative puzzles that uses an item’s individual features alongside its size manipulation such as the Mona Lisa painting becoming a ramp and enlarging an electric fan for a greater wind effect.

The tech demo is available here.

The tech demo showed a potential first person puzzle game that provides an accessible game experience for gamers with fine motor disabilities by allowing the disabled gamer the needed time to consider an answer and to implement their proposed solution. The gameplay consists entirely of moving backwards and forwards towards objects along with placing and rotating the objects as needed to solve the puzzles.

However, the tech demo did include delineating objects based on a colored outline, where objects outlined in blue can be rotated. This may prove problematic for disabled gamers with a visual disability.

Additionally, the video is subtitled because there is no spoken dialogue. Most often gaming videos from large scale commercials to gameplay and tech demos have no option for subtitles. The inclusion of subtitles allows deaf and hard of hearing gamers access to the idea from its conception and the option to follow along with a game’s development. Additionally, none of the displayed puzzles required an audio cue to solve.