Panzerhund Edition For Wolfenstein: The New Order Does Not Include The Game 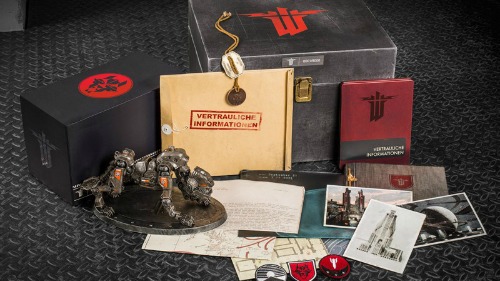 The Panzerhund Edition is limited to 5,000 numbered editions featuring a stamped number plate affixed to the vintage footlocker-style box that houses the collectibles. The Panzerhund Edition packages the box with a classified folder that holds maps, case files, and an x-ray as well as an eight inch articulated Panzerhund statue, a Steelbook for the game, an artbook of bound postcards, patches, and replica dog tags. Priced at $100, the Panzerhund Edition doesn’t include the game, Wolfenstein: The New Order which releases on May 20, 2014 for the Xbox 360, Playstation 3, Xbox One, Playstation 4 and PC.

Wolfenstein: The New Order is a reboot of the classic first person shooter. Disabled gamers who are interested in the Wolfenstein lore but unsure if the reboot is accessible before its release can purchase the collectibles separately while awaiting further information after the game’s release for assessing its video game accessibility.