PAC-MAN And The Ghosts Are Back In A 3D Adventure 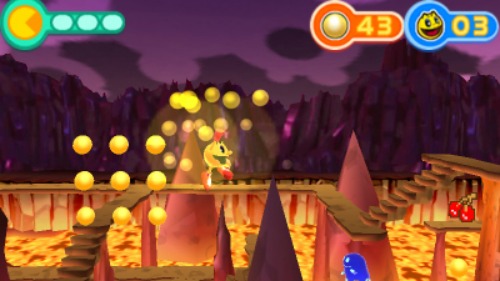 PAC-MAN fans rejoice! NAMCO BANDAI Games America Inc. announced that the release date for PAC-MAN and the Ghostly Adventures, a Nintendo 3DS game, is moved up to November 5, 2013.

For all platforms, a game purchase is now bundled with an exclusive gift, a glow in the dark poster that proclaims, “PAC is BACK.”

PAC-MAN and the Ghostly Adventures on the Nintendo 3DS is a side scrolling game featuring PAC-MAN exploring various levels while collecting coins and battling ghosts with unique power ups from fire and ice powers to turning into a large boulder able to squish ghosts. Additionally, the game includes new multiplayer ghost chase modes and retro arcade-style mini games. The new multiplayer modes are available for hands on play at the NAMCO BANDAI Games booth in the New York Comic Con which runs from October 10-13, 2013.

The inclusion of the poster is a fun freebie but does not impact the game’s accessibility. Gameplay is not available for the Nintendo 3DS version. Screenshots show PAC-MAN, ghosts, and objects clearly outlined against the colorful environments as well as potential moments with muddy images due busy screens including modern and retro pixelated graphics simultaneously along with busy environments and multiple enemies.